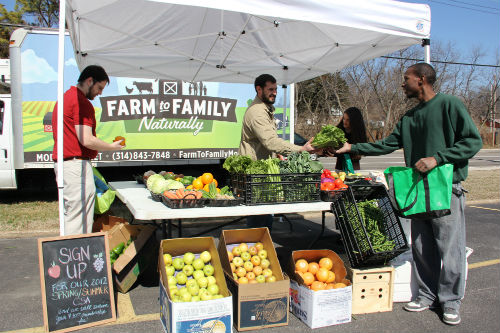 This year CMT’s Sandra Schoenberg Kling New Initiatives Award honored a great new way in St. Louis to deliver healthy foods to many of our communities through the transit system – Metro’s Mobile Markets. For the first time,  St. Louisans can access healthy food choices for their families by hopping on board MetroLink  or MetroBus to one of three mobile markets throughout the week at MetroLink Station park-ride lots.

This award recognized Jennifer Ash, Metro’s Real Estate Manager since May 2008, who spearheaded the efforts on the part of the agency.  Jennifer has formed cooperative working relationships with community partners, utilities, developers, and other public agencies in pursuit of development goals on and around Metro’s real property.  Jennifer works with the Real Estate and Economic Development Departments, as well as other Departments within Metro, and among other projects has been involved with metro’s long-range plan and helping create and manage the NextStop blog and social networking tools. In addition, CMT recognized Jeffrey Randol with Cornerstone Ventures who was instrumental in bringing this project to fruition.

The Mobile Market travels with a refrigerated truck to sponsored sites including the three Metro Transit stops. The program began visiting the Metro Transit stops the week of March 18, 2012, offering affordably priced fresh foods to customers in areas where residents have little or no access to fresh fruits and vegetables.

The 2012 Citizen for Modern Transit Chairman’s Award this year went to Amos Harris and Spinnaker, who have led the way on a $250 million development on top of the Convention Center MetroLink station – talk about building near light rail literally.

The Mercantile Exchange is located at the center of downtown St. Louis, at 7th St. and Washington Ave. This location is home to St. Louis’ business, convention, tourism, and entertainment centers, which bring in 10 million visitors each year. The $250 million project includes the renovations of the St. Louis Centre and the Dillard’s Building, now known as the Mercantile Exchange (MX) and Laurel Buildings, respectively. The converted Laurel Building is 611,000 square feet with a 10,000 square foot atrium. It has been converted into 35,000 square feet of retail space, a 212-room Embassy Suites Hotel, 205 market-rate apartments, and a National Blues Museum, which will be opening in 2012.

Harris also sponsors a WeCar at the site to promote alternative transportation options as one of the big perks of living in the Laurel.

The Mercantile Exchange will also be home to some new restaurants for the downtown area. Pi Pizzeria has already opened in the MX building, and construction will begin soon on Robust Wine Bar and Café, Takaya New Asian, and Snarf’s Sandwiches. Each 4,000 square foot restaurant will have indoor space as well as large patios. The Mercantile Exchange project will eventually include 360,000 square feet of ground floor street-facing retail.