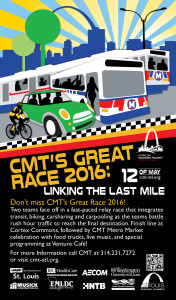 Whether a supporter for Team East or Team West for the 2016 CMT Great Race; Linking the Last Mile, the event was a win for the region with the number of partnerships, local media participation and overall community wide advocacy and awareness building for multi-modal options in St. Louis. While Team West took home the win for 2016 and the bragging rights for  the next year, the region won with a fun and exciting way to promote the regional asset we have in our transit system, the seamless connection commuters can make in this region for multi-modal travel, and the importance of activating the last mile.

CMT’s Great Race 2016: Linking the Last Mile  integrated biking, carsharing, and MetroLink and MetroBus as the teams raced to the final destination at the Cortex Commons, 4240 Duncan Ave in Midtown St. Louis. This approach helped to raise awareness about the viable  transportation options that exist, demonstrate how seamlessly these modes can be integrated together, and highlight the future site of the newest MetroLink Station, the Boyle Street Station in Midtown. The competition placed two teams against one another. One team biked, rode transit to the Grand MetroLink, where they all carshared to the Finish Line destination. The other team utilized biking and MetroBus to  the Forest Park MetroLink station, where they  took the train to the CWE Station and then walked or biked the last half mile. The amount of celebrity participation in this year’s race exceeded all expectations 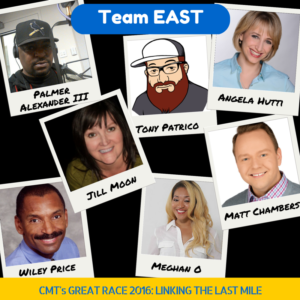 with representatives from print, radio and tv on board for the event including:

“One of our goals of this event was to showcase that workday commuters have options on both sides of the river that extend beyond sitting in traffic, alongside others who are also driving solo in their own personal vehicles.  We were able to achieve this goal and much more through the significant partnerships created around the event to promote many of the transportation alternatives in the region, the benefits of utilizing these modes including the implications to our air quality, health, and economic benefits. Not to mention this fun and exciting event helps demonstrate the benefits the region derives with its world class transit system, greenways and more,” said Kim Cella, executive director of CMT.

Thanks to Cortex CEO and President Dennis Lower and 17th Ward Alderman Joe Roddy for naming the winners for the Great Race 2016.