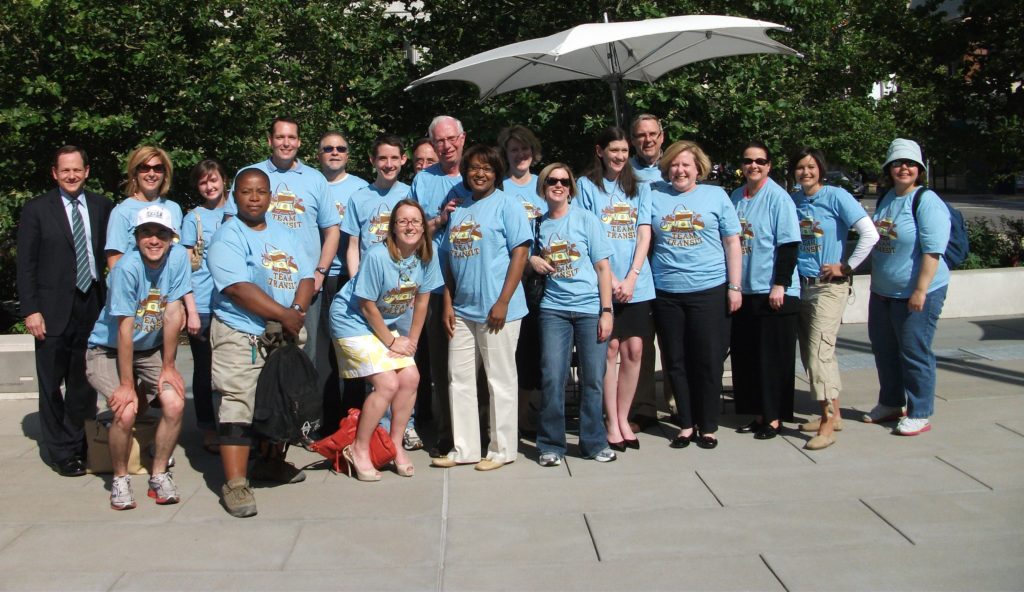 FY12 proved to be a year of connecting people and places with transit. Citizens for Modern Transit (CMT) prides itself on being able to make this connection for St. Louis through events and programs, advocacy and education. Transit has the ability to not only move people from point A to point B, but connect people to people, people to their communities, and communities to their region. Public transit bypasses state boundaries, regional boundaries and the city/county line.  This fiscal year proved to be a great example of just what transit can do through its connections.

CMT hosted numerous events throughout the year on Transit Oriented Development and building near MetroLink. Some of these included Urban Land Institute Technical Assistance Panels on the opportunities around specific stations; resulting in an official RFP for development at the Belleville Station, businesses choosing to relocate near the UMSL South Station, and the University of Missouri-St. Louis leaders embracing the idea of the “Plank Street” Station as a 24:7 destination in the future. Other activities CMT sponsored throughout the year included Walkabouts at several stations, exploring the relationship between the communities and the residents and their stations. This demonstrated a direct connection between the future of the community and the light rail infrastructure as an asset to help them get to where they want to go with transit.

A significant milestone was reached in St. Louis with record numbers in ridership on the system. St. Louis led the country in increases in bus ridership (15.6% – the highest increase in U.S.) and light rail ridership (8.2% – top 10 in U.S.) for the first quarter of 2012. We are positive that many of our initiatives throughout the year helped to remind St. Louisans to get on board transit: the inaugural Great Race, Wake Up to a Sweeter Commute, the Guaranteed Ride Home Program, Transit Pic Challenge Contests and so much more. An increasing number of St. Louisans are making the connection between riding Metro and a safe, easy and affordable option for work or play.

This year proved to be a year of connecting transit to the economy on the local, state and federal level. We know that for every $1 invested in public transportation, there is a $4 economic return for this region. CMT worked diligently through its staff, board of directors and constituents to push for favorable bills for public transit as a way to connect citizens to jobs, economic opportunities and a better quality of life. While there has not been a fundamental shift at the Missouri State Capitol with regards to transit, the message of jobs and economic returns seems to be shifting the tide to a more supportive environment for transit on many fronts.  On the federal front, we did see passage of a two-year transportation bill, MAP-21.

This year also marked a record level of membership in the organization. Membership was 14 percent above our goal, and the highest level in the history of the organization. In addition, CMT received two grants to expand on our TOD work and ridership programs.  CMT also received recognition this year with aTrailnet Active Living Award and the WTS Transportation Innovative Solutions Award.

We know that many of the successes of this organization are due in large part to hundreds dedicated to CMT on the part of our members, volunteers and Board of Directors. Thank you for all of your support!

Each year we take a look back at our accomplishments and strategize where we need to go from here. CMT has much more work to do. Metropolitan St. Louis is primed for transformational change, a change in the way we view transit infrastructure and what we build around it. St. Louis is ready for a different way of thinking with regards to building and developing around the light rail infrastructure currently in place.

We now have the opportunity to manage this change for the greatest benefit for the region. Can we create good right-sized development around MetroLink, a nationally acclaimed, well-patronized infrastructure system that the region has invested over a billion dollars to create? Can we expand the system that we have in St. Louis to reach more areas, serve more residents and provide more opportunities for jobs and development whether that is light rail, modern streetcars or other modes? Can we move our elected officials to support a system and a plan that is regional, doable, and benefits the most people? Now is the time for St. Louis to invest in transit and for CMT and to make these things happen.

I hope you will consider getting on board with CMT  in FY13!