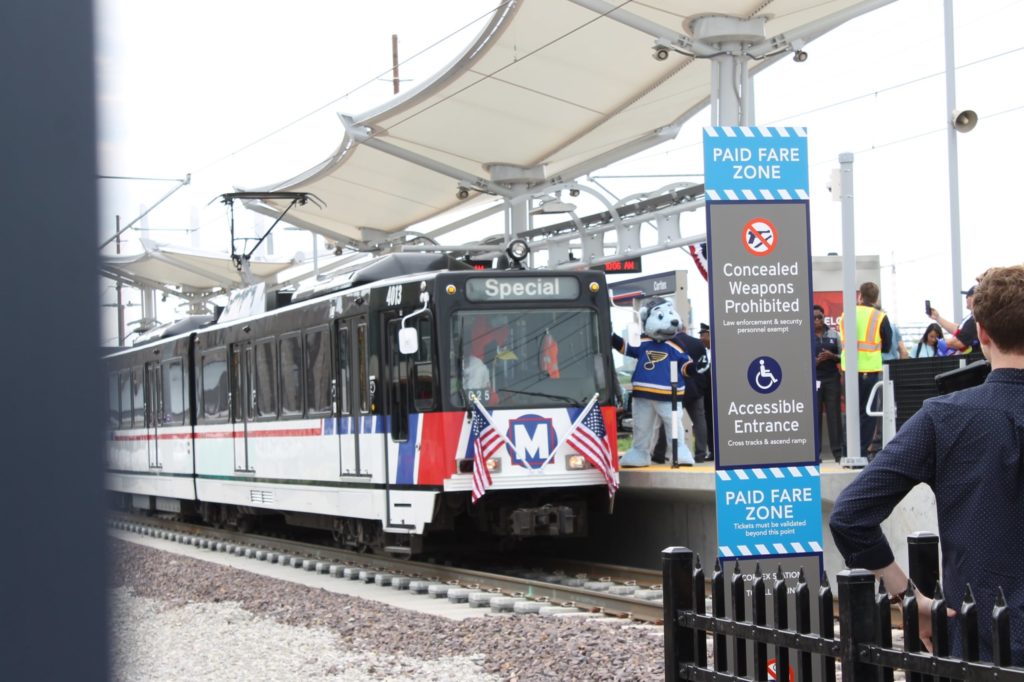 The Citizens for Modern Transit Board of Directors recently endorsed Proposition D in support of transportation infrastructure funding at its Oct. 11 Board meeting, however, the Board also called on  the Missouri Department of Transportation, the Missouri Transportation and Highway  Commission and the Missouri General Assembly to prioritize transit investment as well.   As the legislature and Governor examine Missouri’s economic future, it’s important to realize funds to develop transit infrastructure are key.  Since 2002, transit funding has declined significantly from a high of $8,367,997.  The last several years, transit funding has dropped to a low of $1.7 million for 34 providers from across the state even with the support of the Missouri Highway and Transportation Commission for additional funding. This year, CMT is strongly urging the Governor and Missouri General Assembly to support a return to the 2002 levels of funding from General Revenue for transit operations in Missouri while seeking a long-term funding source for transit capital and operations.

As the regional transit advocacy organization in St. Louis representing more than 22,000 constituents, including riders, major employers, academic institutions, labor and community organizations, Citizens for Modern Transit (CMT) is committed to advocating for state funding for transit to ensure  safe, secure, high-quality transit systems for current and future riders in Missouri.  A commitment to developing and implementing a total transportation package that includes investment in public transit will drive economic growth – improving access to opportunity, attracting talent and creating thousands of jobs. Unfortunately, Missouri is currently spending less than 20 cents per capita on transit. That is far less than neighboring states, and that is not enough to keep Missouri moving forward.

Growth and development patterns are greatly impacted by decisions on how and where to invest in transportation infrastructure. For example, public transit dollars invested in mature communities are playing a key role in urban revitalization and redevelopment. This can be seen in St. Louis, where millions in development has occurred adjacent to the new Cortex infill MetroLink Station. Meanwhile, in rural communities, investment in transit is providing greater access to jobs, education and quality healthcare.

At this time, Missouri transit purveyors provide more than 62 million trips annually. But, as these providers deal with the effects of chronic underinvestment in operating assistance, capital assets, and infrastructure improvements, many are being forced to drastically cut back on services they offer, leaving residents without access to critical employment, educational and healthcare services.  Missouri residents need well-resourced, well-operated transit options..

The 21st Century Task Force on Transportation recent report called for $50-70 million annually for transit and multimodal transportation.  CMT strongly urges in the short term support for the request of $8,367,997 million in General Revenue with an additional $1.7 million from the State Transportation Fund for 34 transit providers in the state.  In the long term, the Governor and Missouri General Assembly must support a statewide investment plan for total transportation including transit.

In so far as Citizens for Modern Transit’s mission is to lead efforts for an integrated, affordable, and convenient public transportation system with light rail expansion as the critical component that will drive economic growth to improve quality of life in the St. Louis region; and

Whereas Missouri ranks near the bottom of the list nationally with regard to transportation/transit funding; and

Whereas, the demand for multi-modal travel in our cities and towns continues to grow according to research; and

Whereas, the state motor fuel tax has not been raised in more than 22 years, and the Prop. D referendum calls for an increase from $0.17/gallon to $0.27/gallon over a four year period, with an annual increase of 2.5 cents per gallon per year, generating approximately $288 million annually; and

Whereas, currently all 34 transit providers in the state of Missouri utilize the current road and bridge system for some if not all of their service provided to residents of the state for access to jobs, education and healthcare; and

Whereas, this influx of funding from Prop. D for Missouri State Law enforcement and road construction and maintenance potentially alleviates some of the burden on the State Transportation Fund, providing possible additional funding availability for transit and multi-modal functions; and

Whereas, transportation providers in MO received $8,367,997 million in 2002 from general revenues funds for operating assistance;

THEREFORE BE IT RESOLVED the Citizens for Modern Transit Board of Directors endorses Proposition D however;

BE IT FURTHER RESOLVED the CMT Board calls on the Missouri Department of Transportation, the Missouri Transportation and Highway Commission, and the Missouri General Assembly to identify a sustainable source of funding to restore state operating assistance for all of modes of transit to the 2002 funding levels of $8,367,997 annually.