With the creation of Clayton’s Transit Oriented Development (TOD) Overlay Districts around the Clayton Ave. and Forsyth MetroLink Stations, the City has paved the way for mixed-use development which takes into account the benefits of transit. The latest development, The Crossing, situated within Clayton’s master plan’s “Central Station District” has taken advantage of this positive TOD environment to introduce a mixed-use, 26 story high rise residential development within a quick walk from the Clayton Station.

“CMT is thrilled to see developers in the region realizing the economic benefits transit provides and building strategically around the St. Louis system.  We hope to see more developments planned around our transit stations and encourage designers of the properties to build developments with walk-ability and transit use in mind. The more we build around the St. Louis transit system, the more opportunity to increase exposure to transit and in the end, increase ridership on the Metro system,” said Kim Cella, executive director of CMT.

Geographically The Crossing occupies a city block in Clayton and is bound by Meramec Avenue on the west, Bonhomme Avenue on the north, Central Avenue to the east, and a newly constructed eight (8) story Metro public parking structure on the south. The Crossing is one block from Clayton’s new MetroLink multi-modal station, blocks from the city’s 47-acre Shaw Park, and within a five-minute walk of virtually every downtown amenity.

“The Crossing in Clayton will significantly stimulate construction and employment opportunities and foster an influx of new residents and businesses. The Crossing in Clayton supports the vision and purpose behind the City of Clayton’s TransitOverlay District (TOD) Ordinance passed in 2007. Accordingly, the development will accelerate the transit ridership goals of MetroLink by promoting masstransit use advancing Clayton’s image as an enlightened eco-friendly modern city,” said Jerry Crylen, partner with GTE Properties, the lead developer.  (A little trivia note, GTE stands for Good to The Earth).

The $72 million dollar project consists of 250 studio, one, two, and three bedroom units on a site immediately adjacent to Clayton’s Central Avenue Metrolink station. The first floor of the building will include approximately 9,200 square feet of retail, bicycle storage and additional eyes on the street with vision glass surrounding the ground floor adding to the perception of safety on the streets.

No TIF is being used on this project.   According to the tax impact analysis, only real estate tax abatement is being used on this project.  Estimates are $15.9 million generated in property taxes with The Crossing development over the 20 year abatement period.  The abatement is 50 percent of that amount ($7.999 million). Without the development, projections show only $2.2 million would have been generated over the same 20 year abatement period in property tax revenues. 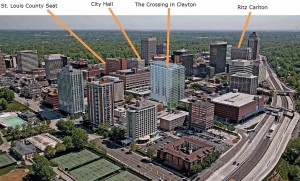 Clayton serves as the government center as the county seat of St. Louis County. It is considered one of the major financial centers in the Midwest and is home to numerous banks, mortgage firms, and over 39 Fortune 500 Corporations. The City of Clayton also contains numerous regional and national headquarters. Surrounding businesses are showing their support of the project.

“We are excited to endorse The Crossing as a workforce housing solution needed by our staff. In our other locations, such as Chicago, Minneapolis, Charlotte, Atlanta, Denver, Houston and Phoenix, our technology-oriented staff regularly choose housing with the attributes The Crossing provides – public transportation (The Crossing’s immediate adjacency is a big plus) and urban lifestyle, including the nearby park and social scene. The Crossing will enhance our ability to attract and retain our technology workforce,” said Cassandra Sanford, CEO of Kelly Mitchell, based in Clayton.

CMT has worked extensively to help the region understand the benefits of Transit Oriented Development (TOD) and has developed a clearinghouse of information to help different audiences in the region think about TOD and its potential for the region. Please find a few helpful links below to some of the resources CMT provides: