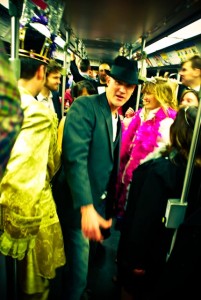 Read the press announcement below.  Will you join them?

It’s 1993—Bill Clinton has just become the 42nd President of the United States, Lorena Bobbatt is on trial for an alleged amateur surgical procedure, Jurassic Park is released, and the Mississippi River is crawling rapidly up the Gateway Arch stairs. Most importantly, though, the St. Louis region now has light rail access. That’s right; it’s been 20 years that St. Louisans have been riding the rails—and we intend to throw MetroLink a 20th birthday party like you’ve never seen before. The 6th Annual MetroLink Prom will pay homage to our light rail system’s 20th birthday with an “almost legal” birthday party aboard the train.  Accordingly, this year we encourage 1990s Promwear—early 1990s grunge seems appropriate—and we always love costumed attendees (dressing up as Zach Morris and Kelly Kapowski of Saved by the Bell fame may or may not guarantee you win Prom King and Queen).

WHAT IS IT?
Just like it sounds – a full-blown, high school-style PROM aboard your favorite transit system. Dress in your finest attire—try to wear something 1990s-themed, though it’s certainly not required—and meet us at the Central West End MetroLink Station on Saturday, October 19th at 7 p.m. We’ll direct you from there. We will ride to the North Hanley Station (the original 1993 terminus of MetroLink) and back to the Central West End, where we’ll award the night’s finest dressed with the title of Prom King and Queen. Along the way, we will have boom boxes playing 1990s standards. Please feel free to send us your mix tapes!

Also, event details may be found at