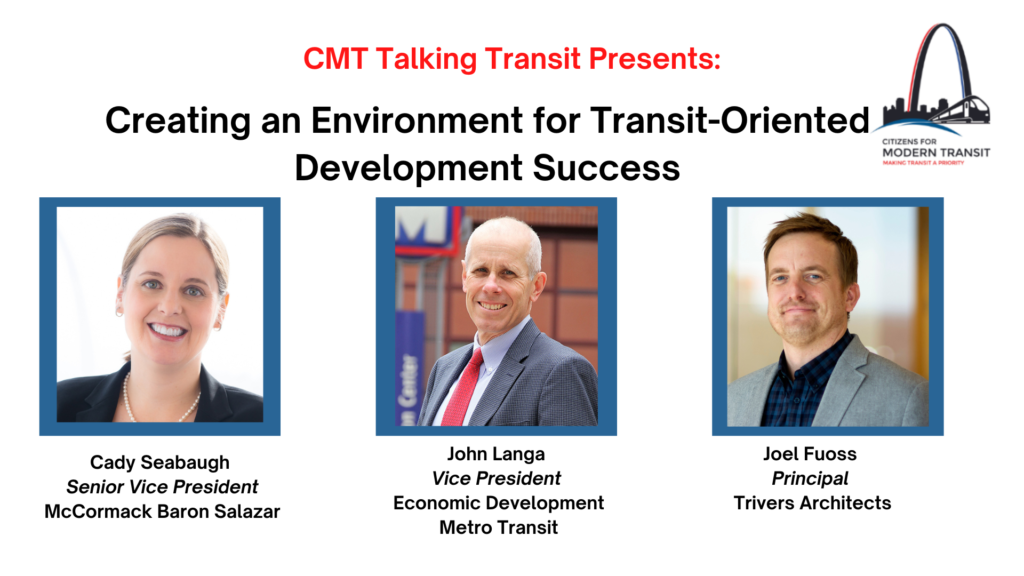 The transit advocacy organization Citizens for Modern Transit (CMT) has announced plans for its next virtual “Talking Transit” event, which is set for Wednesday, Nov. 30, at 8:30 a.m. via Zoom. This event will highlight how to create an environment for Transit-Oriented Development (TOD) Success. Pre-registration is required and can be completed online HERE.

Those in attendance will hear from developers, planners and architects who are working in this arena to entice more development. The panel will feature Aaron Burnett, President of Bywater Development; Cady Seabaugh, Senior Vice President at McCormack Baron Salazar and John Langa, Vice President of Economic Development at Metro Transit. These leaders will discuss their projects, and the associated policies and ordinances that would create more pro-development environments around transit.

“There is a lot to be excited about as it relates to transit in St.  Louis,” Cella said. “This panel will take a look at ways to create even more development around the system in St. Louis, a critical component to building ridership on the system.  We encourage those with an interest in the impacts of public transit to join this online forum.”

CMT hosts quarterly “Talking Transit” events to keep members, elected officials, stakeholders, transit riders and others in the loop on issues and efforts influencing the local transit system. These educational gatherings feature guest speakers and panel discussions addressing a wide range of topics, including transit-oriented development, safety and security, best practices, service changes and more. To learn more about these events and how CMT is working to further transit access in the St. Louis region, visit www.cmt-stl.org.