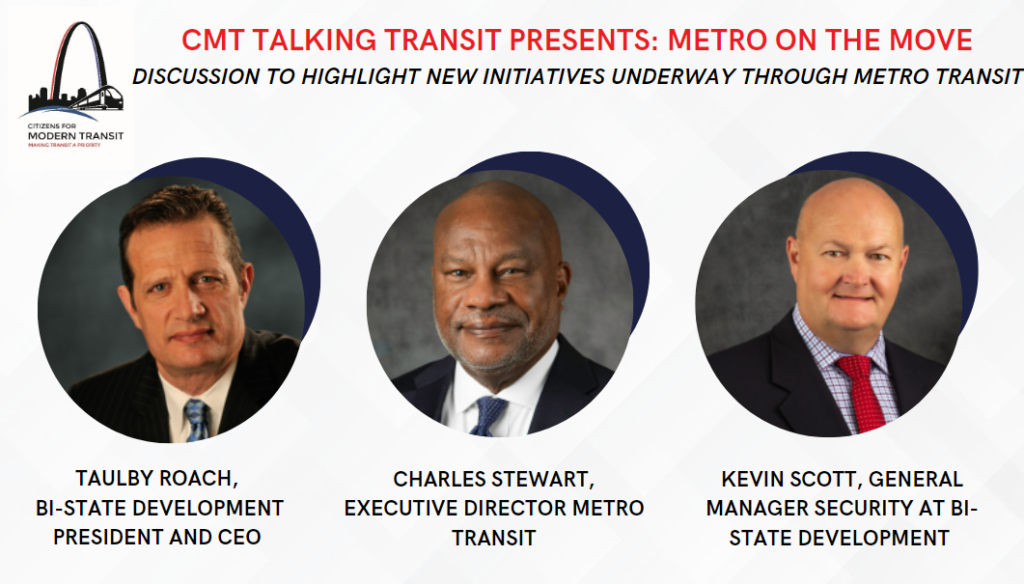 Citizens for Modern Transit (CMT) has announced plans for its next virtual “Talking Transit” event, which is set for Thursday, June 9, at 8:30 a.m. via ZOOM. This event will highlight new initiatives underway through Metro Transit to expand accessibility and further improve safety and security on the St. Louis region’s public system, which is comprised of MetroLink light rail, 59 MetroBus routes, and the Metro Call-A-Ride paratransit fleet. The event is free and open to the public. Pre-registration is required and can be completed online.

Those in attendance will learn about the latest plans associated with the Northside-Southside MetroLink Study with St. Louis City and St. Louis County, the new Secure Platform Plan and the service profile of the organization moving forward. The panel discussion will feature Taulby Roach, President and CEO of Bi-State Development which operates Metro Transit for the region; Charles Stewart, Executive Director Metro Transit; and Kevin Scott, General Manager Security at Bi-State Development and Project Leader for the Secure Platform Plan. It will be moderated by Kimberly Cella, Executive Director of Citizens for Modern Transit.

“There is a lot to be excited about as it relates to transit in the St. Louis region,” Cella said. “We encourage those with an interest in the impacts of public transit access to join this online forum.”