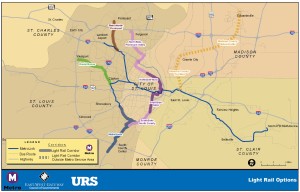 Citizens for Modern Transit (CMT) supports the pursuit of furthering MetroLink Expansion. Transit serves as a critical component of the St. Louis region’s transportation system, and MetroLink expansion is a key to providing increased service in the region for current and future riders, jobs and economic development.

The MetroLink corridor studies being discussed by our locally elected officials will help determine the best future route for the region serving the most residents and employers and providing a catalyst for development along its route.

““CMT serves as the regional transit advocacy organization and we strongly support efforts to expand our existing public transportation system.  It is critical that current transit expansion planning initiatives—which in some cases are more than 20 years old—are updated with more current data about potential ridership and financing to objectively determine which project should rise to the top of the region’s priority list.  CMT notes that the East- West Gateway Board of Directors has not endorsed any route among those identified in the region’s long-range transportation plan.  Prior to choosing the region’s next potential transit route, CMT urges elected officials and all affected stakeholders to convene for a thorough review and discussion of next steps.

We have an opportunity here as a region to craft a route that may not necessarily rely on corridors identified more than two decades ago. With that said, it is our hope and goal that the next project selected is a regional project providing public transit benefits to both the City of St. Louis and St. Louis County and takes into account not only the rides provided but the economic development and social equity opportunities of light rail ,” said Kimberly Cella, executive director of CMT.

Last July,  CMT released the results of its commissioned Transit Funding Study in partnership with Transportation for American in an effort to draw attention to the overall lack of transit funding which continues to prevent large-scale, capital public transit projects from moving forward in the St. Louis region. The studies being discussed in St. Louis City and County are significant transit expansion and service innovation proposals. However, the overall lack of funding has prevented any of these (and similar) game-changing public transit projects from moving forward.

“Transit expansion requires significant resources and does not happen overnight,” said Rose Windmiller, chair the CMT Board of Directors. “Our community is at a critical point regarding public transportation.  There are identified service needs in this region and it is incumbent that we find funding sources to meet those needs. Transit connects the region to employment, healthcare services, recreation, and each other, and our next priority project should meet the needs of both St. Louis City and County.”

Citizens for Modern Transit is a not-for-profit organization in St. Louis whose mission is to expand the light rail system in order to build more sustainable, accessible communities in the region. CMT’s Board represents major employers, academic institutions, labor, chambers, regular transit riders, and others united in support of that mission.