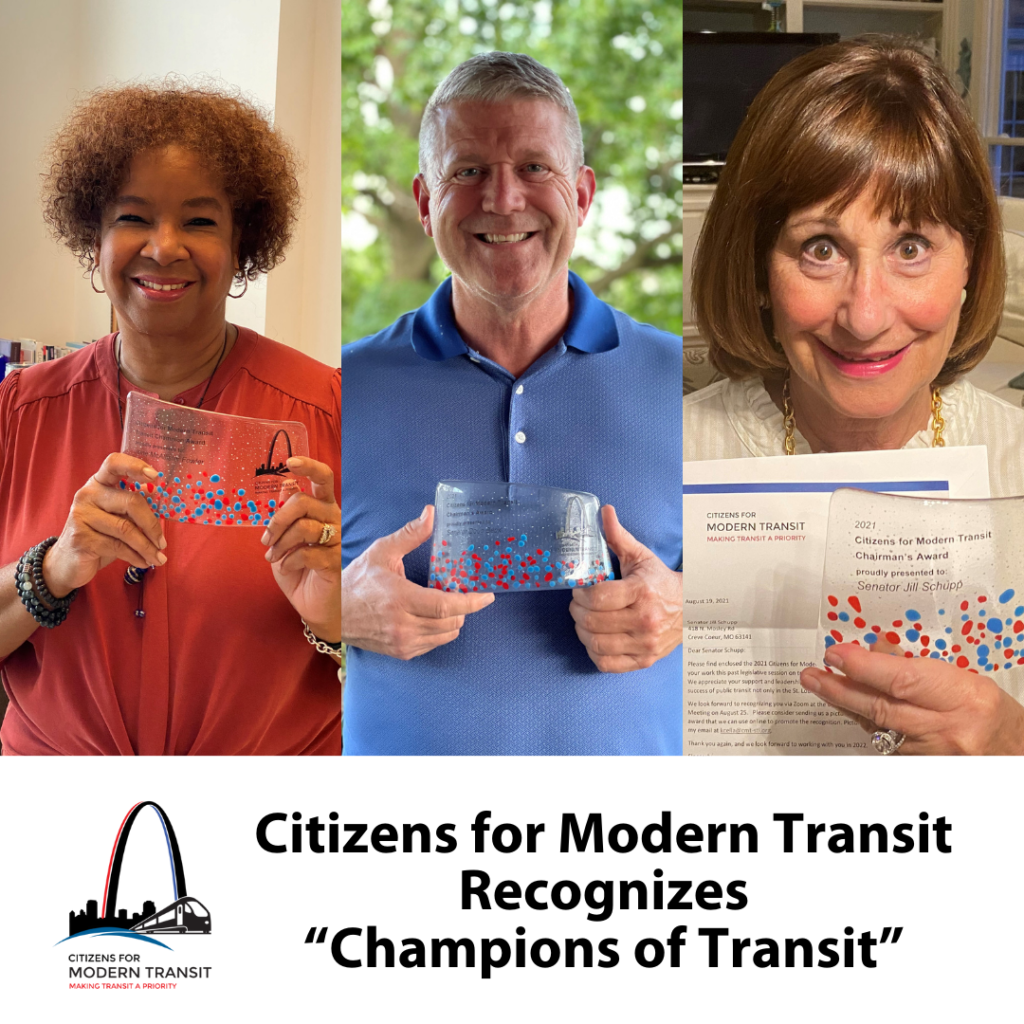 The 2021 Service Award was given to St. Louis-area transit operators for their tireless work to keep public transportation moving throughout the pandemic. They were recognized for being among the frontline heroes in the region. The award was presented to the Amalgamated Transit Union (ATU) Local 788, represented by veteran transit operator Felicia Clayton.

The 2021 Chairman’s Award was given to the St. Louis Senate Delegation for their commitment to keeping the safety and security of public transportation at the forefront during the past legislative session. The award was presented to Senator Karla May, Senator Brian Williams, Senator Steve Roberts, Senator Doug Beck and Senator Jill Schupp.

The 2021 New Initiatives Award was given to St. Clair County Transit District for a variety of new and innovative programs and services designed to meet the ever-evolving needs of transit riders. This included launching a one-year pilot program with Chestnut Health Systems™, a not-for-profit health and human services organization, to help address problematic behaviors on the local transit system; introducing an on-demand micro transit service, known as the Flyer, in East St. Louis, Belleville, Fairmont City and Brooklyn; and completing the “Transit Stop Transformation Project” at the Emerson Park Transit Center, which converted a concrete area between the bus bays and MetroLink entrance into an interactive, playful, engaging space that boasts a vibrant-colored jazz theme, spaces to gather, greenery, shaded seating, canopies and a mural. The award was presented to Ken Sharkey, managing director of St. Clair County Transit District.

The 2021 Champion Award was given to former CMT Board Chair June McAllister Fowler. She has served on CMT’s Board of Directors since 2007, which included time on the executive committee and numerous subcommittees. Under her leadership, CMT launched its permanent placemaking efforts, secured millions in funding for ridership programming, continued it efforts on safety and security of the public transit system, hit historic membership levels and more.

CMT’s Try & Ride program is a recipient of the 2015 What’s Right with the Region award for Demonstrating Innovative Solutions.

Stay in touch with us for new content and updates!