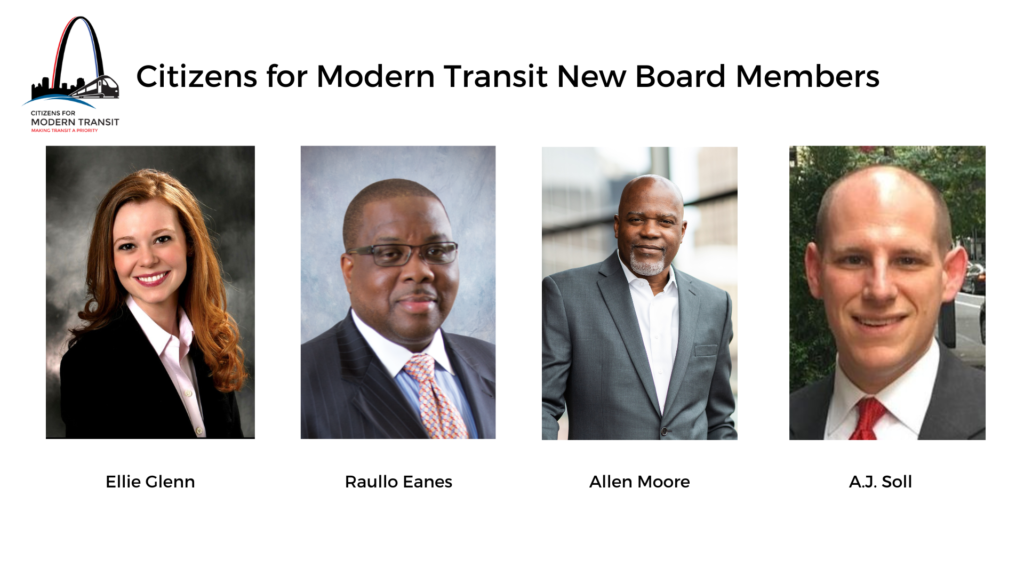 CMT has named Ellie Harmon of BJC HealthCare, AJ Soll of Centene, Allan Moore of Spire and Raullo Eanes of Eager Road Associates, LLC, as the newest members of its Board of Directors. All four members were elected during CMT’s 38th Annual Meeting, held on Sept. 8 at the Marriot Grand St. Louis, and will each serve a three-year term. CMT also elected nine officers to one-year terms and extended the appointment of current board member Marc Scheesele for another three-year term.

Ellie Harmon joined the BJC HealthCare system in 2014 as the director of Government Relations for St. Louis Children’s Hospital. In this role, she advocates for children’s health care issues on behalf of the hospital, their patients and families in Washington, D.C. and in the Missouri and Illinois legislatures. She has previously served as the Director of the Office of Governmental Policy and Legislation for the Missouri Department of Health and Senior Services and as the Legislative Director for former Missouri state Senator Joan Bray. She is the board Vice-Chair of Lydia’s House, a founding member of the Missouri Women’s Policy Network volunteers, a Legislative School teacher at Missouri Boys State and a guest lecturer for various political science and law courses at Washington University in St. Louis, St. Louis University and Truman State University.

A.J. Soll is the Director of Program Management in Centene’s Population Health Solutions Department, where he leads teams focused on developing, deploying, and operating programs to deliver the best health outcomes at the lowest cost. Prior to his current role, Soll built and led a Center of Excellence within Centene’s Enterprise Business Operations, oversaw business development within a nine-state region for a technology firm and spent 13 years in government in positions with legislative affairs, data analysis, policy, program management and operations teams.

Allan Moore has been part of Corporate Security at Spire, Inc. for more than a decade. He got his start as a manager and currently serves as the Director of Corporate Security, overseeing strategic and tactical corporate security operations and the protection of employees, facilities and pipeline systems. Before coming to Spire, he was a police lieutenant with the St. Louis Metropolitan Police Department, where he served for more than 20 years before retiring. He serves as board chair of the of the Greater St. Louis Chapter of the American Red Cross, chair of the St. Louis Area Corporate Security Leadership Organization and serves on the board of the Community Improvement District in the Downtown area.

Raullo Eanes has more than two decades of professional experience, currently serving as a Managing Partner of Eager Road Associates, LLC, where he provides a focused and personalized approach to best practices, strategic business consulting, coaching and mentoring services to small and middle market companies. Eanes is a board member of Family Focus, mentor with True Mentors, founder and board member of 20 Second Time Out Foundation and founder and past board member of Legacy Bank, located in Milwaukee, Wisconsin.