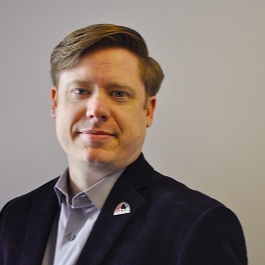 Citizens for Modern Transit (CMT) announced the election of Charles Hinderliter, Director of Government Affairs for St. Louis REALTORS® and resident of St. Louis County, to its Board of Directors. He will serve a three year-term.

Prior to taking on his current position with St. Louis REALTORS®, Hinderliter worked at the St. Louis Regional Chamber and spent several years working on political campaigns. He also taught courses in American Politics and International Relations at Maryville University, Western Illinois University and Jefferson College. Hinderliter has been actively engaged in civic education for 20 years, serving as a judge, mentor, coach, coordinator and scholar for the Center for Civic Education’s We the People programs.

In addition to serving on CMT’s board of directors, Hinderliter currently serves on the Missouri Bar’s Advisory Committee on Citizenship Education, the Deaconess Foundation’s Policy Advisory Board, the U.S. Global Leadership Coalition’s Missouri Advisory Committee and the UMSL Alumni Association Legislative Advocacy Committee. He has also served on the board and as President of the Maplewood Public Library. Hinderliter received a Bachelor of Art degree in Political Science from the University of Missouri – St. Louis and a master’s in political science from the University of South Carolina.

“Citizens for Modern Transit is thrilled to have Charlie representing St. Louis Realtors Association on the CMT Board,” said Kim Cella, executive director of Citizens for Modern Transit.  “His experience will go a long way towards furthering the organization’s mission to expand a safe, integrated and affordable public transportation system throughout the St. Louis region.”