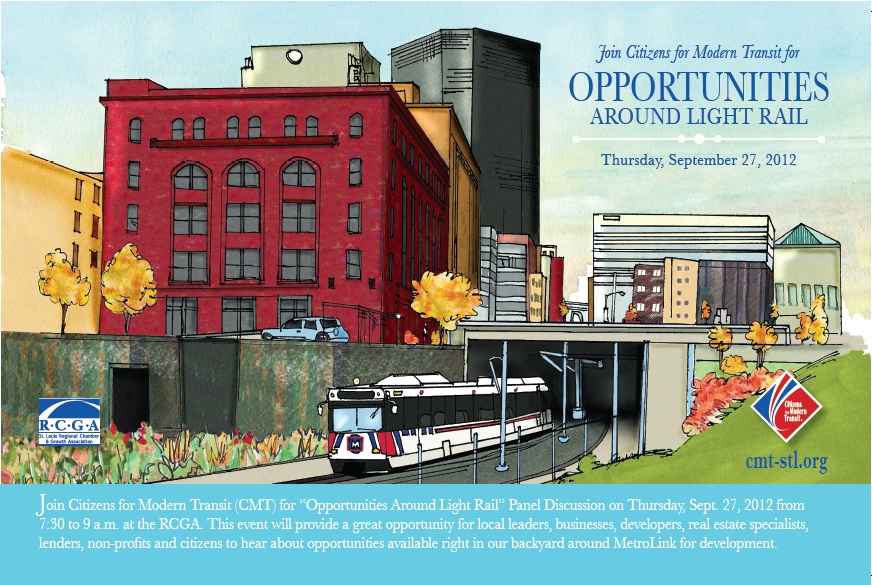 More than 75 CMT members, friends, developers and interested citizens joined CMT this morning for the Opportunities Around Light Rail Panel Discussion. Local ‘champions’ highlighted opportunities around their stations, and Amos Harris, partner with Spinnaker St. Louis, highlighted his brand new TOD in the $250 million Mercantile Exchange Development atop the Convention Center Staton.  One of the most exciting aspects of the event was that as diverse as the group of panelists were in their representation of instititions, businesses and organizations in St. Louis, there was a resounding theme that MetroLink is an opportunity for change to walkable livable communities in the region.

MetroLink opened in St. Louis in 1993, and unlike other cities, building around our public transit infrastructure has not gone as far as the region could hope.  After 19 years of not utilizing the system we have as a catalyst for development, CMT and others hope now is the time for the region, developers, lenders and interested citizens to finally see the potential around our light rail.

Over the last year, CMT has aggressively advocated for this development, commissioned ULI Technical Assistance Panels at two stations with a third in the works at the GRand MetroLink Station, hosted community discussions at Walkabouts on development potential, pushed for policy change in communities along the alignment and will continue to work to move development forward.

Panelists included Amos Harris, principal of Spinnaker St. Louis and developer of the MX District. Harris is responsible for the $250 million development of both the Laurel and MX Buildings, representing more than one million square feet of property including the Embassy Suites Hotel in Downtown St. Louis, Pi Pizzeria, The Laurel Apartments, The Collective, and much more to come on top of the Convention Center MetroLink Station.

Betty Van Uum, Assistant to the Provost for Public Affairs and Economic Development at the University of Missouri St. Louis, highlighted the North Hanley Station.  Ken Christian with Stellar Management, a consultant to Beyond Housing, highlighted the Rock Road Station and its surrounding communities. Last but not least, Don Roe, Acting Director of Planning and Urban Design,  highlighted the potential around several city stations including recent overlay zoning adopted by the City of St. Louis this past summer.

John Langa, Vice President of Economic Development at Metro, joined the panel following the presentation. Christian highlighted the fact that there are more than 146,000 jobs within a half mile radius of the MetroLink system in Missouri alone. Beyond Housing’s goal is to ensure that a development moves forward in Pagedale where the Rock Road Station is located that provides higher density workforce housing that gives people the opportunity to remove the transportation expenses from their daily living costs.   By reducing the dependency on automobiles, commuters can save upwards of $7,000 to $13,000 a year (American Public Transit Association).

VanUum talked about the opportunities that abound around the North Hanley station including the built in workforce and consumer base with the UMSL campus adjacent to the property with 4,000 faculty and 16,000 students all looking to spend money. Roe highlighted the opportunties out there around the 12 stations within the City’s boundaries including a potential new station at Cortex.

For more information on the presentations, click on the links below:

Thanks to sponsors Metro, Polsinelli Shughart and RCGA.