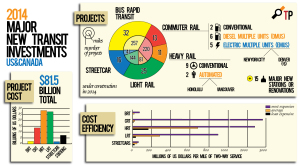 The Transport Politic highlights billions in major transit investments in the US and Canada in 2014- a banner year in every metropolitan region in the U.S.  Yonah Freemark, the blog’s author, summarizes the impact and cost of the projects and offers the following observations:

While there has been a frenzy of construction this year, Freemark also notes that the federal government put a freeze on funding in 2010 that will have long-term consequences on future projects.  Freemark then goes on to compare costs between transit projects in the states versus projects in Europe.  Where full featured tramway projects in Europe cost $30 million per mile, the following info is what projects in St. Louis might cost in the near future:

Article source: “Opens and Construction Starts Planned for 2014,” by Yonah Freemark in the Transport Politic.  Found on 12/11/14 on the world wide web at http://www.thetransportpolitic.com/2014/01/05/openings-and-construction-starts-planned-for-2014/.