Bike share has arrived in St. Louis!  Two bike share companies now have a total of 1,500 bikes out in St. Louis, with plans to bring in up to 2,500 by June.  These bikes offer a great opportunity to close the first mile/ last mile gap. These bikes also offer an affordable and healthy compliment to the current transit system.

Bike Share is a network of shared bicycles available for short-term use.  Dockless bike share does not use stations, but instead, can be found through the bikes through GPS locators on a smart phone app or by calling a phone number. The bikes are self-locking by clamping the back wheel, allowing the bikes to be more widely available throughout the city. The bikes can be parked on the strip of sidewalk between the walking area and the street, and at public bike racks.  They cost around $1 per 30 minute or 60 minute ride (companies have slightly different pricing), with discounts for people of low income and students.

Bikes will also be available in areas of dense activity like around Downtown, Forest Park, Central West End, and Tower Grove Park. Bikes will go where riders take them – they can be parked anywhere in St. Louis at bike racks or out of the way between the sidewalk and the street.  ​A minimum of 20 percent of the bikes will be allocated to low income neighborhoods, including target neighborhoods to the north between Delmar and Natural Bridge, and in the Dutchtown South area. 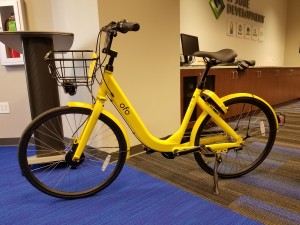 “Car trips in the United States, less than one mile, have created an additional 10 billion vehicle miles traveled.  We are hoping that we can begin limiting that, have fewer cars on the streets and have more affordable and carbon free transit,” said LimeBike Director Sam Sadle.

“Getting people out of cars, makes people healthier, makes cities healthier, and makes them more easy to navigate and use,” said ofo Director Carter Stern.