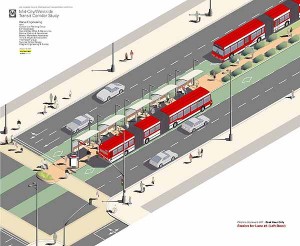 Based on the recommendations of the recently-completed St. Louis Rapid Transit Connecter Study (RTCS), Bi-State asked its Operations Committee to review the results of the RTCS and forward the results to Metro’s full Board of Commissioners for approval.  The Board’s approval of this report would allow Metro Staff to proceed to the next phase of study which would involve including the suggestions of the RTCS in the Transportation Improvement Plan (TIP) at East West Gateway Council of Governments and pursuing grant funding to further the study.  The image provided here is from a BRT plan from another city and captures some of the characteristics of BRT systems studied.

The completed RTCS was initiated in October 2012 and completed in December 2013. The RTCS was jointly managed by the Transportation Corridor Improvement Group (TCIG), consisting of staff from Metro, EWGCOG, the City of St. Louis, St. Louis County, and MoDOT. The TCIG met monthly and provided input and guidance to Metro and the study team.

Moving Transit Forward targeted four Missouri interstate corridors including I-70, I-64, I-44, and I-55 as potential candidates for high-performance transit service. Community and stakeholder input during the long-range planning process preliminarily identified BRT as the ideal mode for these four corridors, in line with the nine core values that shaped the long-range plan:

• Consider time and cost of implementation.

The first phase of the RTCS narrowed those four interstate corridors to the two that offer the best opportunities for premium transit service in the near future, I-64 and I-70. The second phase formulated four BRT options within that study area, two east-west corridors and two north-south corridors.

The final phase of the alternatives analysis measured the performance of each transit option in terms of the study’s goals and evaluation criteria, including projected ridership, improved levels of service, revenues, and costs. The RTCS concluded with a recommended Locally Preferred Alternative (LPA) of two BRT projects.

The 1-64 BRT corridor spans 23 miles between the City of Chesterfield and Downtown St. Louis. It would serve a limited number of park-and-ride stations along I-64 between Chesterfield Mall and the Central West End. From the Central West End it would travel along Forest Park Avenue into Downtown St. Louis, making a loop through Downtown before ending at the Civic Center Station. As currently proposed, its service frequencies would match MetroLink, and transit prioritization strategies would be implemented along the corridor to speed transit travel.

The I-64 BRT would serve a Central Corridor that hosts 55,000 people and 115,500 jobs within one half-mile, outside of Downtown St. Louis. The addition of this high-performance service to the Metro System would provide the region’s first rail-like transit option in West St. Louis County, offering the first opportunity for all-day, single-seat service between Chesterfield and Downtown St. Louis, and reducing transfers from other areas by half. Along with reducing transfers, it would improve transit travel time within the corridor by 30%, making it a much more attractive alternative to the personal automobile. Ridership projections from EWGCOG’s regional travel demand model show a potential ridership market of 5,100 weekday riders, 2,100 (41%) of whom would be new “choice” riders. That market is projected to grow to 6,800 weekday riders by 2040.

The other transit project included in the LPA is an arterial-based BRT route connecting North St. Louis County to Downtown St. Louis. This service would operate out of the new North County Transit Center, running 16 miles to Downtown via West Florissant Avenue, Lucas and Hunt Road, and Natural Bridge Avenue. As currently proposed, its service frequencies would match MetroLink; stations with a high level of customer amenities would be spaced a minimum of one mile apart; and transit prioritization strategies would be implemented to speed travel.

The combined West Florissant-Natural Bridge corridor hosts 70,000 people and 18,000 jobs within a half-mile, not counting Downtown St. Louis. Supplementing the local bus network in this strong and proven transit market will give residents of North St. Louis City and near-North County their first high-performance, rail-like transit option. It will reduce transit travel time and any required transfers by half. It would also greatly improve access and travel time between some of the region’s most disadvantaged areas and major jobs centers in Downtown and the Central Corridor, particularly if paired with the I-64 BRT option. Ridership projections from EWGCOG’s travel demand model show a potential ridership market of 3,200 weekday riders, 600 (19%) of whom would be new “choice” riders.