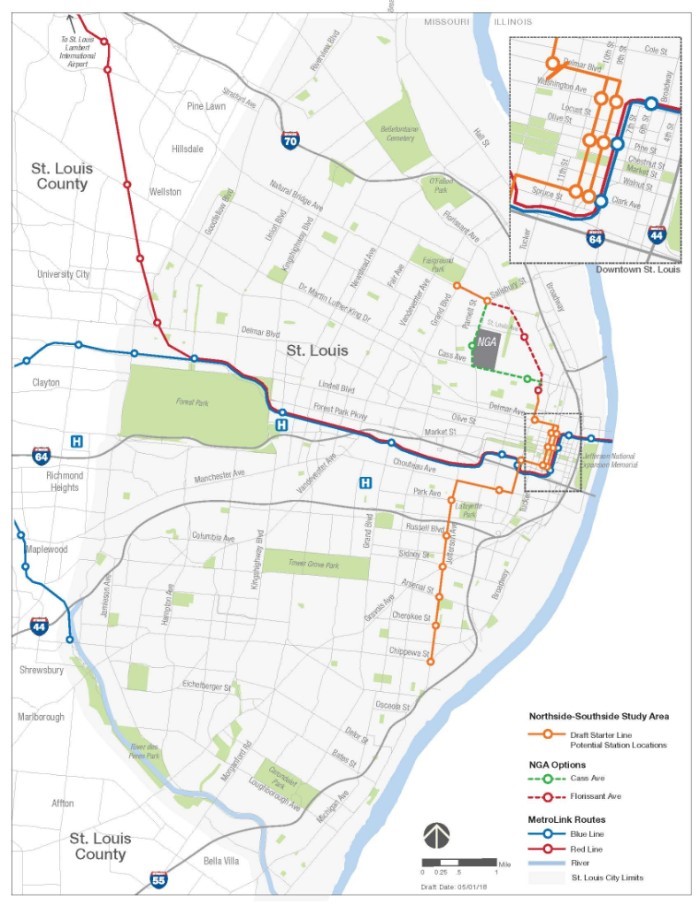 The Bi-State Board of Commissioners approved staff to enter into an agreement on Jan. 22 with the City of St. Louis to jointly manage the Northside-Southside Corridor Technological Alternative Analysis Study. The City is currently in negotiations with a firm to lead the study.

The City of St. Louis released a RFQ in August of 2020 for PROFESSIONAL ENGINEERING AND TRANSPORTATION PLANNING SERVICES FOR NORTHSIDE-SOUTHSIDE CORRIDOR TECHNOLOGICAL ALTERNATIVES ANALYSIS, ST. LOUIS, MISSOURI. The City made its first official request to utilize $1.4 million from the Transit Fund portion of the Economic Development Tax passed in 2017 to conduct an alternative analysis in the Northside-Southside corridor. The goal of the study will be to provide a thorough analysis of revenue sources (the 2018 study shows a $250 million capital gap and $20-25 million operating gap annually) and possible technologies for the corridor. The City of St. Louis’ budget was approved in late-June of 2020.

The previous Northside-Southside Study wrapped up in June of 2018 after a year and a half of data analysis, study and public feedback from over 60 presentations, meetings and open houses.  The mission of the consulting team was to ensure the best route for Northside-Southside would align with community investment strategies, serve area neighborhoods and residents, and provide pedestrian access to the National Geospatial-Intelligence Agency (NGA) West campus.

The study team led by AECOM recommended to the Board of East-West Gateway Council of Governments, our metropolitan planning organization, a $667 million street-running light rail investment that would run from Chippewa Boulevard in the South through downtown to Grand Boulevard in the North via one of the two North St. Louis alignment options.

The first phase would:

More than 60 percent of voters in St. Louis City supported Proposition 1 in April 2017 for MetroLink expansion and economic development.  The proposition facilitated a half-cent sales tax increase in the city for “economic development purposes,” including a Northside-Southside MetroLink, neighborhood revitalization, workforce development, public safety, and upgrades to the city’s infrastructure. The fund currently has an estimated  $40 million.