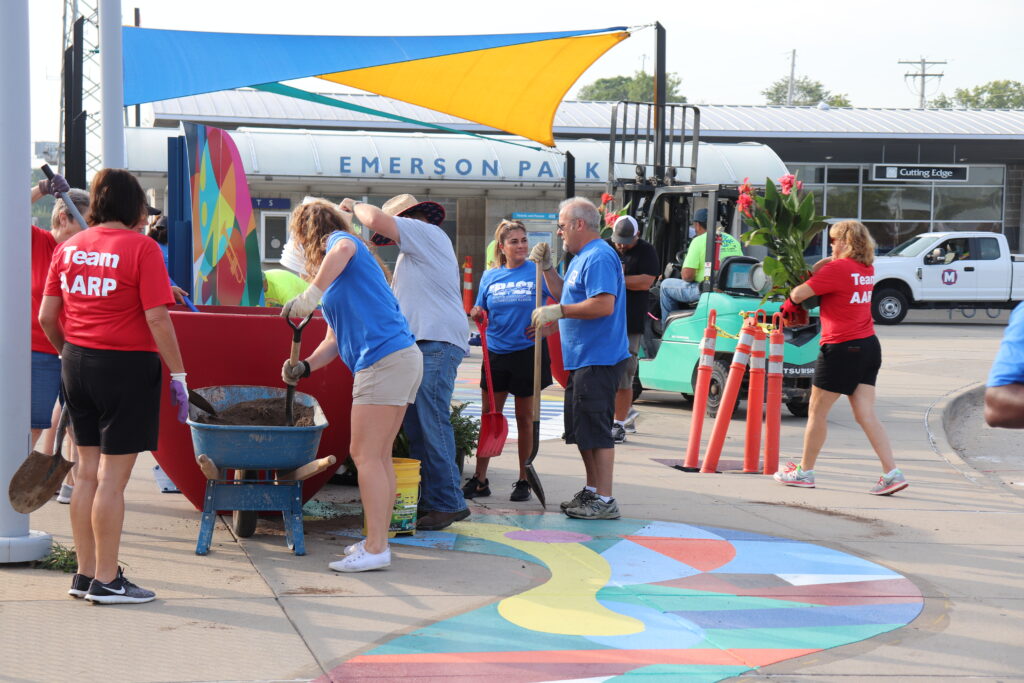 Citizens for Modern Transit and AARP in St. Louis are excited to announce that St. Clair County Transit District’s Board has committed $60,000 to help transform the Belleville Transit Center, located at 800 Scheel Street in Belleville, Ill, into a vibrant and engaging space. Partners are working to form the project team and look forward to providing an update on next steps as details are confirmed.

This announcement comes on the heels of the opening of the “Transit Stop Transformation” Project at Emerson Transit Center in East St. Louis, Ill., where the concrete area between the bus bays and MetroLink entrance were converted into an interactive, playful, engaging space featuring a vibrant-colored jazz theme, spaces to gather, greenery, shaded seating, canopies and jazz music piped in for transit riders to enjoy each day. There is also a mural inspired by design concepts that was created by East St. Louis High School students. This transformation opened to the public in late August.

The first transformation project was completed at a Maplewood MetroBus Stop, located at the southwest corner of Manchester Rd. and Marshall Ave. in Maplewood, Mo. Through partnerships and community engagement, this older, rundown bus shelter without much around it was transformed into an ADA accessible site, boasting vibrant colors and green spaces. New shelters, a glider and bench were installed, and lighting and better sight lines were incorporated to improve visibility, safety and security. There is now more waiting space, better access to the adjacent green spaces and a hopscotch game that adds an interactive, play element to the design. The site also features an art installation – created by a local, award-winning painter and mixed media artist –that graphically depicts Maplewood landmarks. This project was completed and opened to the public in June 2020.

“Transit Stop Transformation” Projects are designed to showcase a deep understanding of and commitment to equitable development around transit, the impact and possibility of play, the ability for creative interventions to produce long-term impact in neighborhoods accessible for residents eight to 80 years of age, and the need for collaboration to succeed. Partners work with stakeholders to build consensus and policies to move permanent development forward – and ultimately help improve safety and security, build ridership on the system and increase activity around transit, while reinforcing the element of fun that comes with activating space around transit and building community.