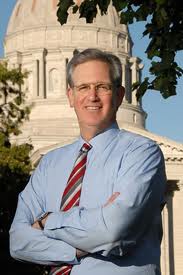 MoDOT is requesting $2.5 million from state general revenue this year for transit operations in addition to the core funding of $560,875 from the State Transportation Fund. If this appropriation is approved, it would restore funding to the FY10 levels for transit – which is nowhere near where we need to be but in the right direction. (This funding is spread over 33 transit providers in the state – 7 urban and 26 rural providers.)

The request is currently on Governor Nixon’s desk.  Please consider calling, emailing or sending a letter to Governor Nixon in support of this request.  We will be bringing this message on Feb. 1 for Transportation Day, but we want to ensure that this appropriation is included in the budget.

Here is a draft letter for your use:

Transportation is the key to moving Missouri forward.  I am writing to voice support for the Missouri Department of Transportation’s request for the $2.5m appropriation from state general revenue for transit operations.  Last year Missouri transportation providers received little more than $500,000.  If the request is appropriated at this level, the money would restore funding to the FY10 levels.

Transit is the key to putting Missouri back on track!  The facts show investment in transit creates jobs.  Research has shown that every dollar invested in transit projects has a $4 return.  There are few investments at this time that can yield a 400% return.

The current level of state support for transit is inadequate.  The State of Missouri ranks near the bottom of the list (45th) for funding of public transit.  Local funding has hit a ceiling in many areas. In order to compete for federal dollars to put our economy back on track, Missouri must make transit a priority through support and funding.  You may not ride transit, you may not know anyone who uses the bus or trains; however, this state needs transit.   In St. Louis alone, more than 75 percent of the 223,000 daily boardings on transit are for the work commute.  Transit creates, maintains, and sustains JOBS that Missouri cannot afford to lose!

In addition, with an aging population in Missouri of residents 65 years or older, transit is the answer to meeting the needs of our seniors and disabled residents. Transit increases accessibility, connects them to their communities, and keeps them active and healthy.

I strongly urge you to support MoDOT’s request and look at ways to go beyond this appropriation to make public transit a priority for Missouri.