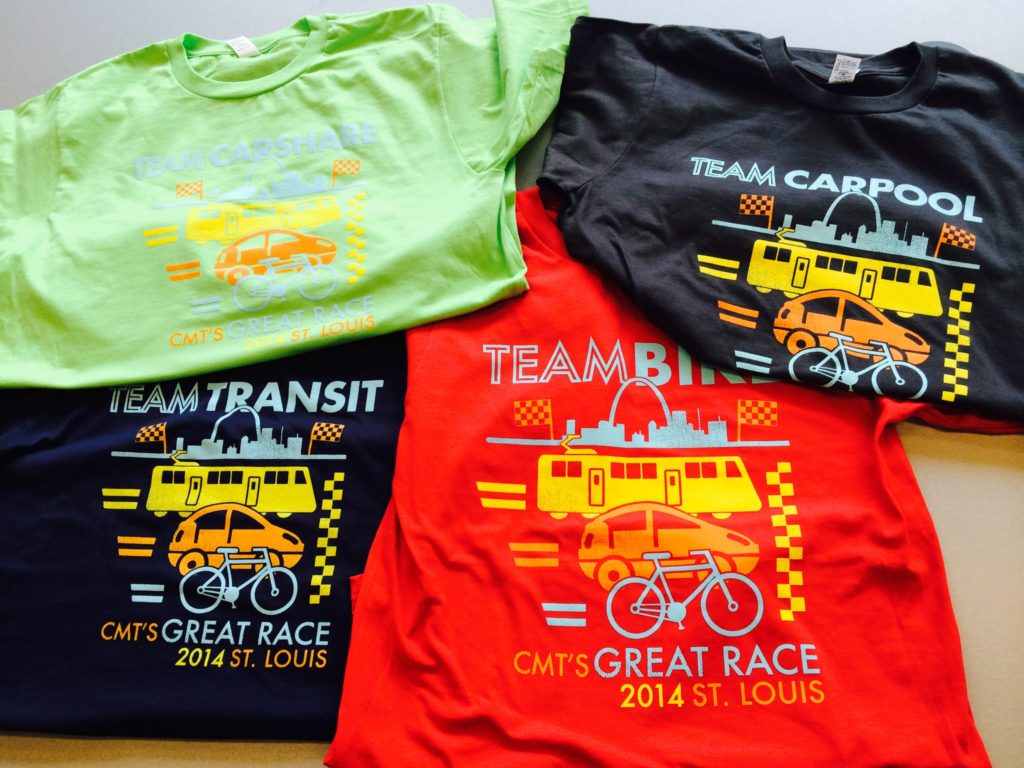 The CMT Great Race tshirts are in, the teams are formed, the food trucks  are lined up, and the granola bars are ready – the question is are you ready to Make Your Move on Metro this May with CMT at one of our exciting events around transit? CMT has a month of events planned to make sure area residents and transit commuters alike have the opportunity to give transit a try, register for the Guaranteed Ride Home Program, vision the possibilities around the current transit system we have, linking walking and transit and so much more.

The activities kick off on May 8 with the Great Race and Metro Market.  Each Great Race team will consist of local media personalities and representatives of companies and organizations with a vested interest in the alternative commute, including Heidi Glaus of KSDK Ch. 5, Diana Zoga of KMOV Ch. 4, Angela Hutti of Fox 2 News, Todd Morgan of KHITS 96, Jean Ponzi of KDHX 88.1 FM and KTRS 550 AM, Riz and Tony Patrico from 105.7 The Point, Kevin the Intern of the Phillips & Company Morning Show on Y98, Jade Harrell from Majic 100.3, Don Corrigan of the Times Newspapers, Felizia Medina of St. Louis Magazine and Julie Cohen of Sauce Magazine, as well as representatives from Citizens for Modern Transit, Metro, Enterprise CarShare, RideFinders, Great Rivers Greenway, STL Style, Fortel’s Pizza Den, the City of St. Louis, the St. Louis Regional Chamber and others.

The race will get underway at Fortels Pizza Den, located at 7359 Forsyth Blvd. From there, each team will follow route specifics indicative of the chosen transportation mode as they try to travel the fastest to the Shrewsbury/Lansdowne MetroLink Station on Lansdowne Avenue at River des Peres Blvd. Recognition and bragging rights will be awarded to one of the teams by the City of St. Louis Mayor Francis Slay, County Executive Charlie Dooley and County Councilman Pat Dolan, before the Metro Market officially gets underway at the Shrewsbury/Lansdowne MetroLink Station . 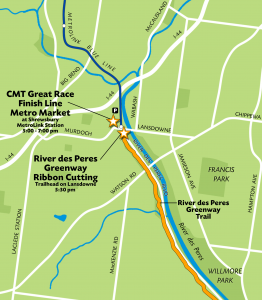 “This is the third year hosting this race, and each year, the anticipation surrounding this event heightens,” commented Kim Cella, executive director of Citizens for Modern Transit. “Participants really get into it, and at the end of the day, it does an excellent job of showcasing the many viable transportation options offered in our region. This year we are excited to add a unique twist with the Metro Market. This live visioning session will serve as a means to demonstrate what could be, at this, and other MetroLink stations, over and above a park-ride lot. The event is free and open to the public and we encourage area residents to come check it out.”

The Great Race and Metro Market are made possible thanks to the support of Enterprise CarShare, Great Rivers Greenway, RideFinders, Metro, St. Clair County Transit District, the Missouri Foundation for Health, Fortels Pizza Den, STL Style and Central States Bus Sales. These are part of a series of events hosted by Citizens for Modern Transit throughout the month of May to help promote St. Louis’ transit system and its benefits to the region.

Other events to celebrate Transit in St. Louis include:

To learn more, call Citizens for Modern Transit at (314) 231-7272,  find them on Facebook at www.facebook.com/CMTGreatRace or on Twitter @cmt_stl.