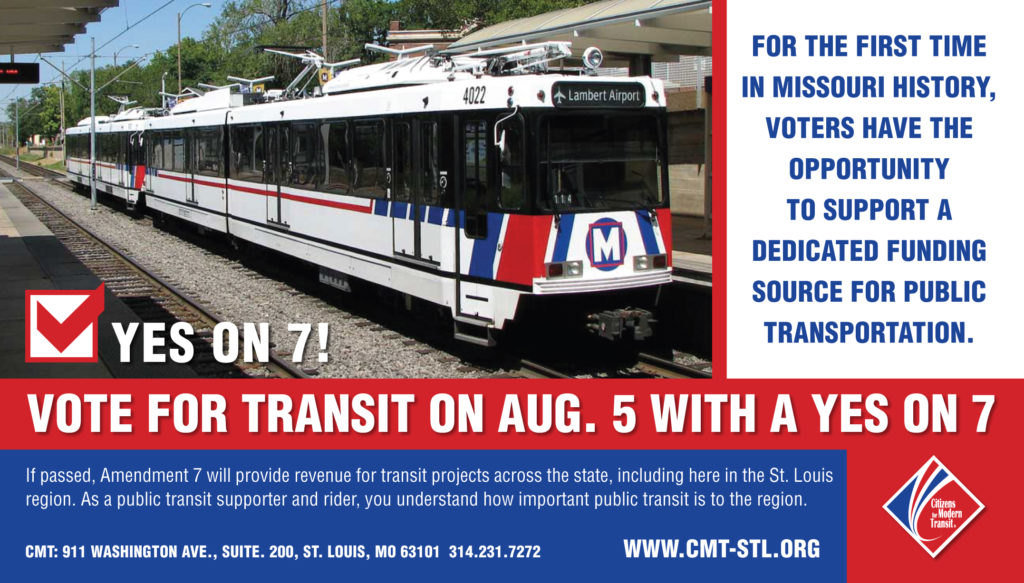 For the first time in Missouri history, voters have the opportunity to support a dedicated funding source for public transportation. The Missouri Highway and Transportation Commission approved a list of priority projects to  fund through Amendment 7 including more than $800 million in transit projects over the next ten years including committed matches to Amendment 7 funding from regional sources like the City of Kansas City, MoDOT and Metro.

If passed, Amendment 7 will provide revenue for transit projects across the state, including here in the St. Louis region.   As a public transit supporter and rider, you understand how important public transit is to the region.  Nationally, Missouri ranks near the bottom of states which provide support for transit.  Voting YES on Amendment 7, a three-fourths of 1 percent increase in Missouri’s general sales tax, is your opportunity to support funding for the region’s critical public transit projects.

This tax will provide the St. Louis region with millions for public transit projects over ten years. Projects include:

Funds dedicated to the projects identified in Amendment 7 cannot be diverted by current or future politicians to non-transportation projects. Goods including groceries, prescriptions drugs and fuel are exempt from this tax.

Hear what supporters are saying about Amendment 7 and TRANSIT:

Public transit is important to our total economic development, quality of life, and our entire workforce.  Modern funding streams will allow us to enjoy a better future funding model for all transportation modes. –       Len Toenjes, President, AGC St. Louis

Amendment 7 includes over $800 million to help improve and expand mass transit including matching funds from cities and MoDOT as well as provides a substantial injection of dollars to help fix our state’s crumbling roads and bridges. 7 is Missouri’s only chance to create thousands of jobs while making sure our infrastructure is safe and reliable for our family, neighbors and friends.  Yes on 7 is the only responsible choice for Missouri voters.”  – Gary Elliott, Business Manager of the Eastern Missouri Laborers’ District Council

Amendment 7 offers voters the critical opportunity to support a dedicated stream of funds for public transit in MO. As advocates and users of public transit, please consider Missouri’s transit needs and VOTE YES ON AUG. 5 FOR AMENDMENT 7.