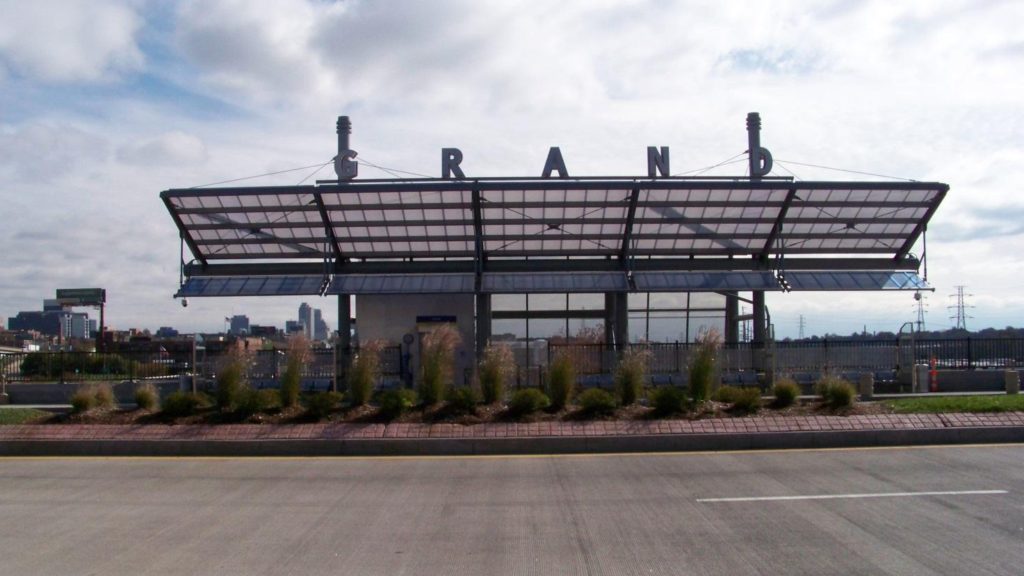 CMT engaged the ULI St. Louis Chapter to do a Technical Assistance Panel (TAP) for the Grand MetroLink Station. The TAP, composed of local experts on land use, policy, and development, spent two days analyzing opportunities for the station, interviewing stakeholders, and developing a possible plan to move short and long term development forward. TOD education and advocacy is a key goal for CMT this year.

According to the panel, “Transformative change cannot occur in incremental steps here.  It needs a bold vision…something to transform the site.”

At a special presentation to the community on Nov. 13, the panel outlined possible transformative measures that could change the entire area around the station.  Chouteau’s Greenway as an idea has been around for years. The panel suggested that any plans at Grand must keep these plans in mind as well as push for the fruition of the Chouteau’s Greenway concept.  The opportunity to work with MSD on this project should be considered.  The panel also floated the idea of a high speed rail hub at the Grand MetroLink Station. With space for ample parking and a station with wide platforms, it could be the perfect location to link multiple modes of transportation according to the panel.

The final bold idea generated was to move from focusing on the station which sits below grade to building above the station – a platform development at street level.  Some of the merits of this type of development included:

Considering that the area around the Grand Station is considered one of the more challenging stations however one with probably the a higher upside potential, CMT directed the panel to look at both short and long term options for the area.

In the near term, the panel suggested improvements to pedestrian experience at the station level and on Grand Ave as well as north and south of the new Grand Bridge.  As with the UMSL South Station TAP, the panel suggested a ‘master’ developer for the area. This time the panel suggested using Chapter 353 – the “Urban Redevelopment Corporation Law” – to land bank, relocate, and clean up the parcels around the station.  Boundaries suggested included  Grand Center 353 (north); CORTEX 353 (west); Chouteau Ave (south); and Compton Ave (east).

Whether there is a transformative measure that changes the game at the Grand MetroLink Station or short term measure such as improved pedestrian access, signage and landscaping  to increase ridership, there is a significant opportunity for improvement at this station. CMT will continue to focus on this station area with a new Missouri Foundation for Health grant to look at form based zoning overlays for the area around the station.

Special thanks to the ULI Panel for their work on this project.