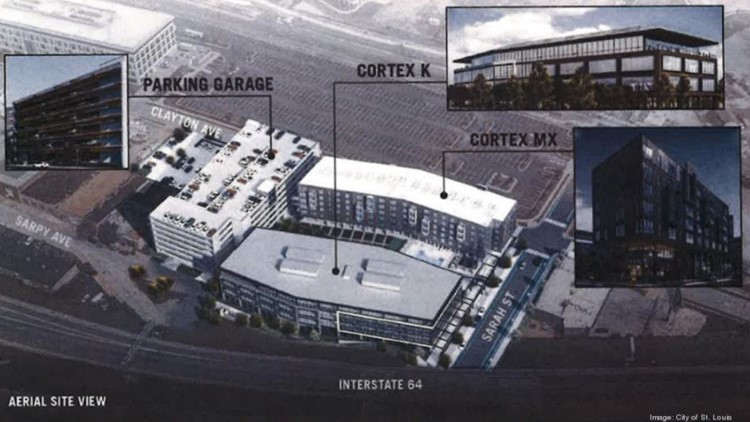 Image Credit: SLBJ – A proposed development from KDG at North Sarah Street and Clayton Avenue in the Cortex Innovation Community.

Developer KDG is proposing a three-building development in the Cortex Innovation Community, with residential, office and retail planned, just steps away from the Cortex MetroLink station.

KDG, made up of Koman Group and Keeley Development Group, plan to seek tax increment financing, a type of public subsidy, for the three-building development at North Sarah Street and Clayton Avenue.

City of St. Louis documents say the project would cost $99 million, and is seeking $14 million in TIF assistance. A hearing on that request is scheduled for May 26 before the city’s TIF Commission.

The documents say a first, seven-story building would include 160 apartments, 18,500 square feet of office space and 2,150 square feet of retail space. That $37 million building could open in the first quarter of 2023, they say.

Next would come a 125,000-square-foot office building, with 7,000 square feet set aside for retail. That $40 million project — contingent on preleasing 50,000 square feet — wouldn’t be completed before the third quarter of 2023, the city said. A 610-space parking garage would also come in the phase.

In addition, the city said the area would get public improvements totaling about $3.5 million, with details still being worked out by KDG and Cortex. They could include streetscape, lighting, sidewalk and bike lane improvements on Sarah and Clayton.

Click here for the full story from the St. Louis Business Journal.