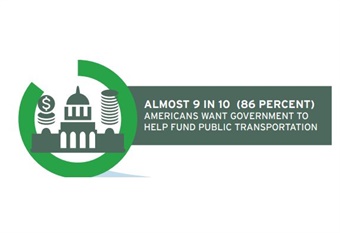 A new HNTB Corp. America THINKS national public opinion survey finds 86% of Americans believe government should help fund public transportation. According to survey data, this belief is held most strongly among Americans living in urban areas (92%), 85% of suburban respondents, as well as 79% of those living in rural areas agree.

According to the survey, Public Transportation in the U.S.-2018, support for government funding of public transportation encompasses every age group with highest support among millennials at 93%, and seniors composing the lowest majority support with 61% of seniors in agreement. Additionally, Americans across the nation support government funding for public transportation, with all areas of the country showing strong support in the mid to high 80 percentile.

“Americans recognize the value and benefits of public transportation, and believe government funding is essential to build and maintain a public transportation system that delivers quality service,” said Kim Slaughter, HNTB national transit/rail sector leader and sr. VP. “It is remarkable the extent to which people across the nation, living in every type of community setting and across all age groups agree. Transit agencies and elected officials should take particular note of the support among younger segments of the population, and recognize they are increasingly in the majority as consumers of public transportation, as well as voters and taxpayers.”

The survey detailed a variety of other information including demographics of the survey participants.  Check out the original article from Metro Magazine here.