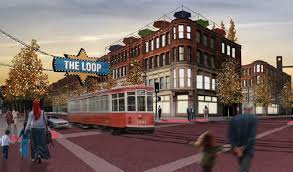 The Loop Trolley Transportation Development District (TDD) has received approval from the Federal Transit Administration (FTA) for a $25 million Urban Circulator Grant to build a fixed-route electric trolley system in the City of St. Louis and University City. The FTA grant is the major funding source for the $43 million project.

The Loop Trolley is one of only five proposed projects out of 65 nationwide to receive the FTA Urban Circulator Grant. Judging criteria include livability, sustainability, economic development and leverage of public/private investments.

“This really is an exciting honor for the entire St. Louis region, more than Forest Park and The Loop,” said Joe Edwards, owner of Blueberry Hill and the Moonrise Hotel. A staunch promoter of The Loop revitalization, in 1997 Edwards first proposed bringing back a clean electric transit system to the area.

“We’ve always had a goal of building the trolley system without tapping into general funds from the City of St. Louis or University City,” said Edwards. “We’re very pleased with the FTA’s support, comments and suggestions, and we’re grateful to everyone who has worked to bring the Loop Trolley project to this point.”

The 2.2-mile Loop Trolley will run along Delmar Blvd. and DeBaliviere Avenue, connecting The Loop restaurant, shopping, and arts & entertainment district to Forest Park, with a stop at the Missouri History Museum. The Loop derived its nickname from the streetcar system that serviced the area until 1966.

The project includes installation of the tracks, construction of 10 station stops, and a roundabout with landscape elements at the western terminus. The trolley will run on a grass track through the St. Vincent Greenway. The Loop Trolley TDD is working with Great Rivers Greenway to extend the greenway with new landscaping along DeBaliviere Avenue south to Forest Park.

The Loop Trolley system will be electrically powered and will operate three cars – a restored historic trolley car and two vintage replica cars that the Loop Trolley TDD is purchasing from Tri-Met, the public transit system in Portland, Oregon.