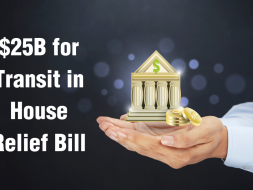 The U.S. House released its version of the third coronavirus relief bill Monday. The Take Responsibility for Workers and Families Act, H.R. 6379, would provide $25 billion in grants to the transit industry.

The transit funding would be administered through the Federal Transit Administration using Fiscal Year 2020 formulas and could be used by agencies for operating expenses. The bill states the funds should be distributed no later than seven days following enactment of the bill.

Funding would be broken down approximately:

“It is imperative that Missourians reach out to our Congressional delegation about the importance of public transit as a part of this relief package.  Transit is essential now and will be even more essential as we get back to the business of building safe, sustainable and economically viable communities,” said Kim Cella, CMT amd MPTA Executive Director.