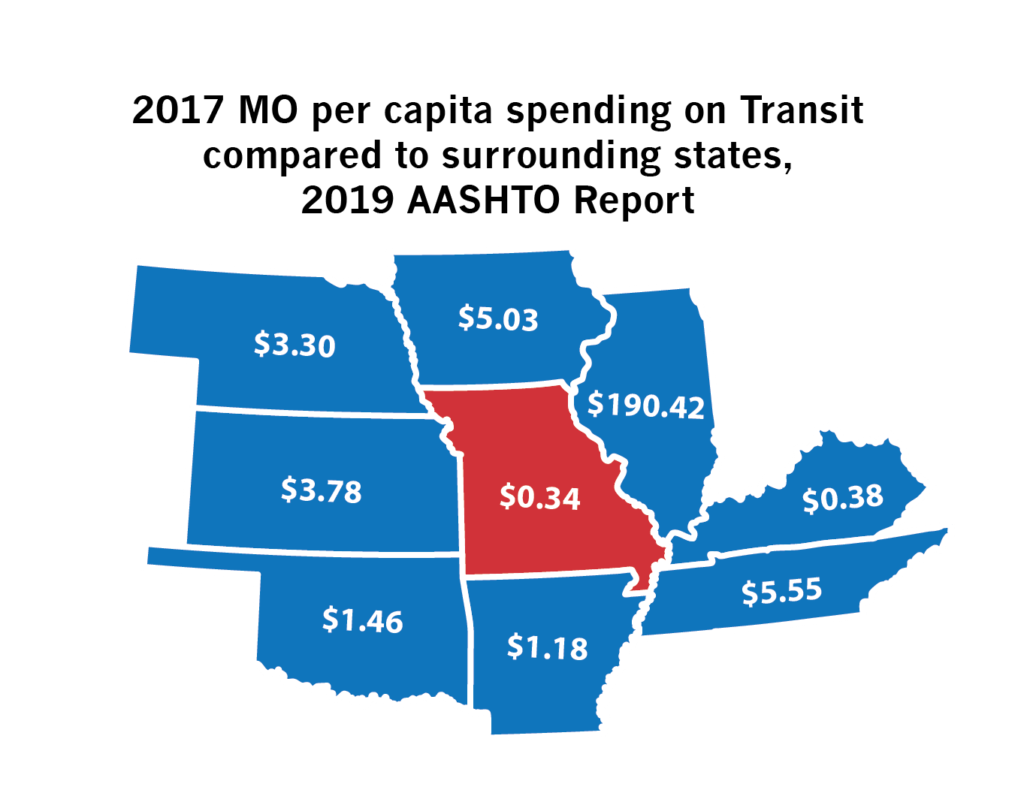 Missouri’s investment in transit for 2019 continues to remain the same. The Missouri Legislature just wrapped its 2019 session including its work on the FY 2020 budget. House Bill 4 (HB4) contains $100 million in general revenue for transportation infrastructure funding. It only includes $1,710,875 in State Transportation funds for transit.  Funding from General Revenue for transit was zeroed out in 2017.  This $1.7 million will be split among 34 transit providers in the state. This number remains the same as prior year.   The bill contains $50 million for all expenditures associated with the planning, designing, construction, reconstruction, rehabilitation, and significant repair of bridges on the state highway system under the Commission’s five-year Statewide Transportation Improvement Program.

The AASHTO Survey of State Funding for Public Transportation – Final Report 2019 just released, based on FY2017 data, ranks MO 46th with regards to per capita funding for public transit (includes DC). Only 5 states have a lower per capita investment than Missouri’s 34 cents per capita.   Four of those states have no state investment for transit:  Alabama, Hawaii, Nevada and Utah. Of the remaining states, only Idaho at 18 cents per capita is lower than Missouri’s 34 cents.

Conceal and Carry on Transit

Various bills were introduced in the MO House of Representatives and the MO Senate this session which would allow individuals with conceal/carry permits to carry their firearms on public transit buses, vans, trains, and other spaces owned or operated by a public transit provider. In light of the understanding that allowing firearms on public transit may serve as a detriment to ridership and has not been proven to enhance safety and security of the system, CMT as well as many MPTA members opposed any legislation which would allow carrying concealed weapons (CCW) on transit. Several Missouri transit providers including Bi-State, KCATA, and City Utilities of Springfield testified along with CMT and MPTA at hearings throughout the session.

In the final weeks, Rep. Schnelting, the sponsor of HB 643 allowing CCW permit holders to carry on public transit, distributed this language as an amendment on SB 89, a commercial vehicle bill and SB 291 relating to public safety.  These bills along with HB643 were moved to the Informal calendar in the House.  Senator Onder, sponsor of SB39 on CCW on transit, had several opportunities to bring the bill up on the Senate floor, but opted to take up other bills.  He did attempt to add language to the budget restricting funding to any transit provider who prohibits CCW.  He withdrew the amendment after a brief engagement with Senator Nasheed who opposed.