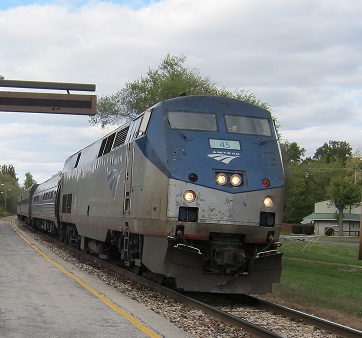 Now is the time for the St. Louis region, which is currently served by passenger rail in both Missouri and Illinois, to step up and fight for a mode of transportation that provides jobs, and is a vehicle for commerce and economic development between the two states. Step up and do not accept the status quo; demand more and better service.  Passenger rail infrastructure has proven that it is a catalyst for economic development, a greener alternative to automobile travel, and a lasting jobs creator.

The U.S. House of Representatives Fiscal Year 2012 (FY2012) Transportation, Housing and Urban Development (THUD) Appropriations bill – which has been passed by the THUD Appropriations Subcommittee – cuts Amtrak’s operating funding by 60 percent, includes a legislative rider prohibiting Amtrak from using any federal funds to help states pay for state supported routes, and provides no money for high-speed and intercity rail projects.

The U.S. Senate’s FY2012 THUD Appropriations bill would maintain current funding levels for Amtrak and also includes a bipartisan amendment that would restore $100 million for high-speed and intercity passenger rail. This funding is completely eliminated in the House version of the bill.  The House bill would mean elimination of the Amtrak service from Chicago to St. Louis and St. Louis to Kansas City.

You CAN make a difference.

Last week, Amtrak announced the railroad reached a milestone by carrying over 30 million passengers in one fiscal year. This is the highest ridership total since Amtrak began operations in 1971. In fact, Amtrak has set national ridership records for every fiscal year since 2002 with the exception of 2009. Missouri ridership continues to increase each month as well.  Now is not the time to be lax about passenger rail, now is the time to get on board with Amtrak. Take a Seat, Make a Stand and Ride and invest in Amtrak!