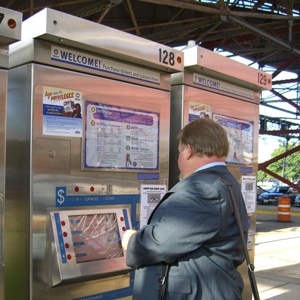 On Tuesday, August 28, installations of new ticket vending machines (TVMs) and ticket validators on MetroLink platforms began in Illinois.  This marks the start of equipment updates on Metro’s entire fare collection system.  The stations seeing these upgrades initially will be 5th & Missouri, East Riverfront, Fairview Heights, Shiloh-Scott, College, Swansea, Belleville, Emerson Park, Jackie Joyner-Kersee, Washington Park, and Memorial Hospital.  The TVMs will be in the same locations except at Memorial Hospital, where they will be relocated.  The ticket validators will remain in the same locations, but have a slightly different appearance.

Improvements are starting on these stations because they house the oldest of the TVMs on the alignment.  TVM and ticket validators in Missouri will receive upgrades later this year.

Customers will now be able to purchase transit tickets/passes in Illinois, using a credit/debit card, as Missouri riders are capable of doing.  Riders will have the option of buying a 1 day, 7 day, or 30 day pass and be able to choose the date the pass becomes valid.