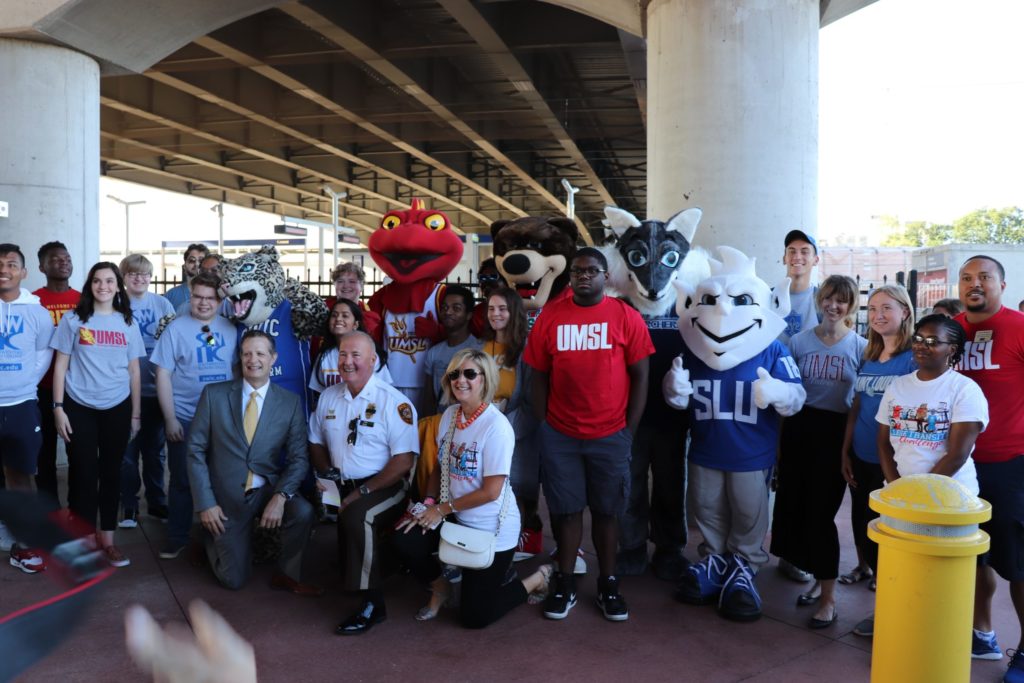 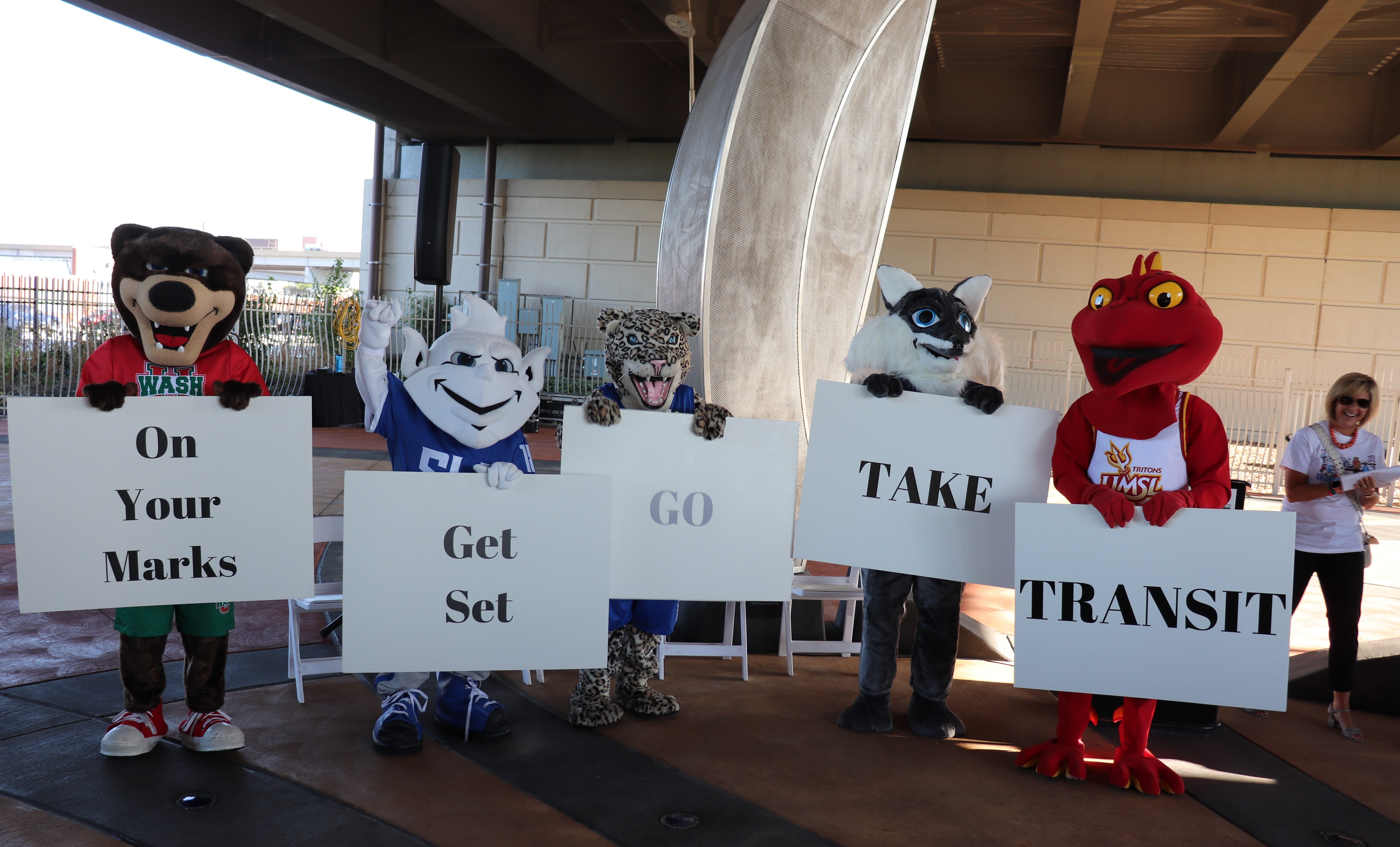 Led by the mascots for each of their schools, students, faculty and staff from five of the St. Louis region’s colleges and universities hopped on board the Metro Transit system Aug. 28 to compete in the first ever College Transit Challenge. Hosted by Citizens for Modern Transit (CMT), Metro Transit, St. Clair County Transit District and the Bureau of Transit Police, the event was aimed at reinforcing the advantages of a robust public transit system and further boosting ridership among students, faculty and staff at higher education institutions. Organizers teamed up with St. Louis Community College, Saint Louis University, Southwestern Illinois College, University of Missouri–St. Louis (UMSL) and Washington University in St. Louis for the challenge. Those affiliated with the respective schools helped their college or university compete by taking MetroBus or MetroLink and checking in via social media with a status update or photo with #iTakeTransit, along with mentioning their school. After a full day of checking in on Instagram, Facebook and Twitter, bragging rights were awarded to UMSL, whose students and staff shared more online posts highlighting their transit use than any other college or university participating in the challenge.

Kim Cella, Executive Director of CMT, served as emcee for the kick-off event at the Grand MetroLink Station, where mascots, students and staff from all the schools gathered to share their school’s spirit and get the challenge started. 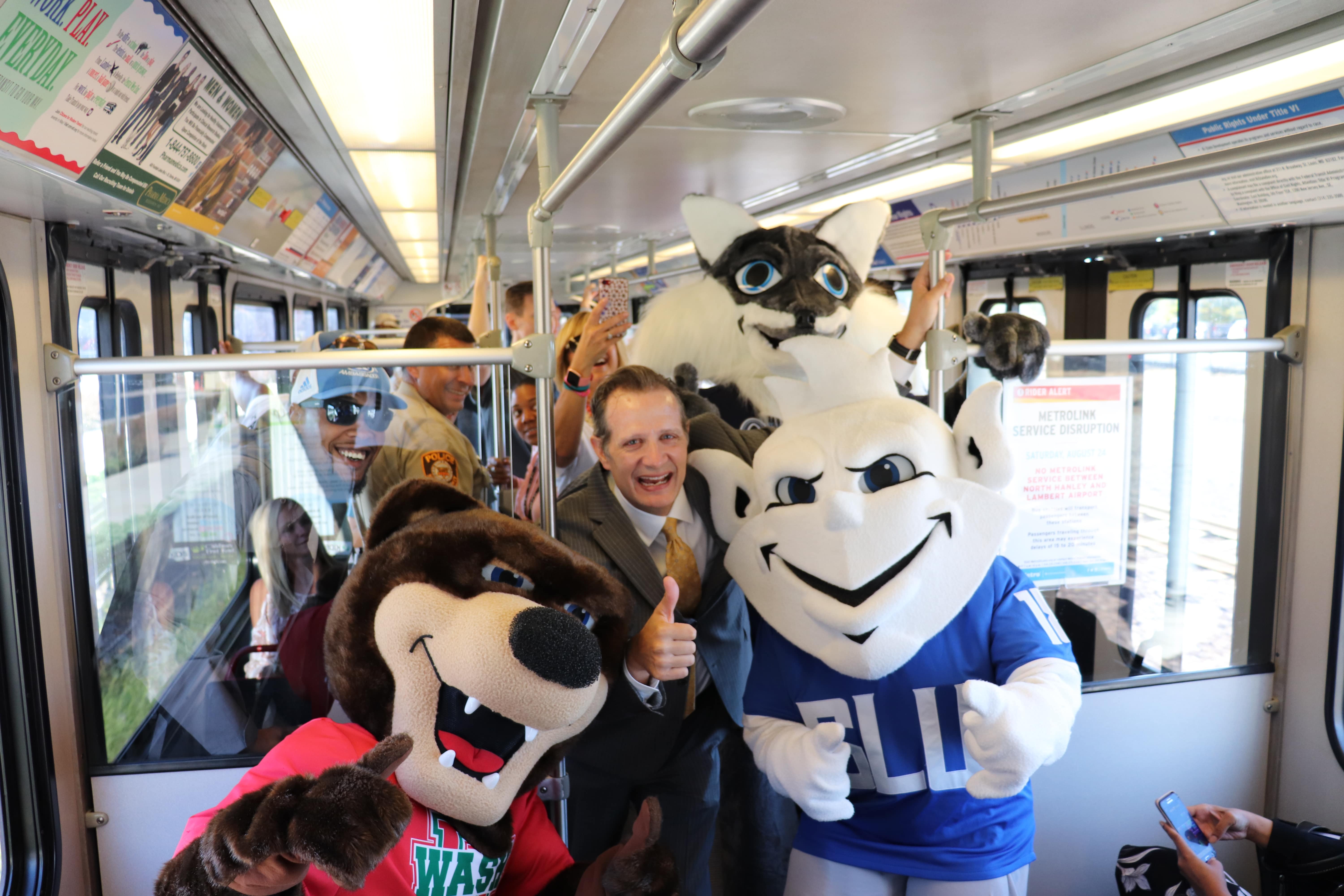 As the transit advocacy group, we are constantly looking for outside the box ideas to promote transit use and its benefits in the region,” said Cella. “We know public transit as a safe, cost-effective transportation option for people of all ages and makes education more accessible. So, what better way to inspire students and staff from our local universities and colleges to give it a try than to create a little competition for bragging rights for highest transit ridership.”

UMSL Chancellor Tom George was up for the challenge, joining school mascot Louie the Triton and several other members of the UMSL staff and student body at the kick-off. 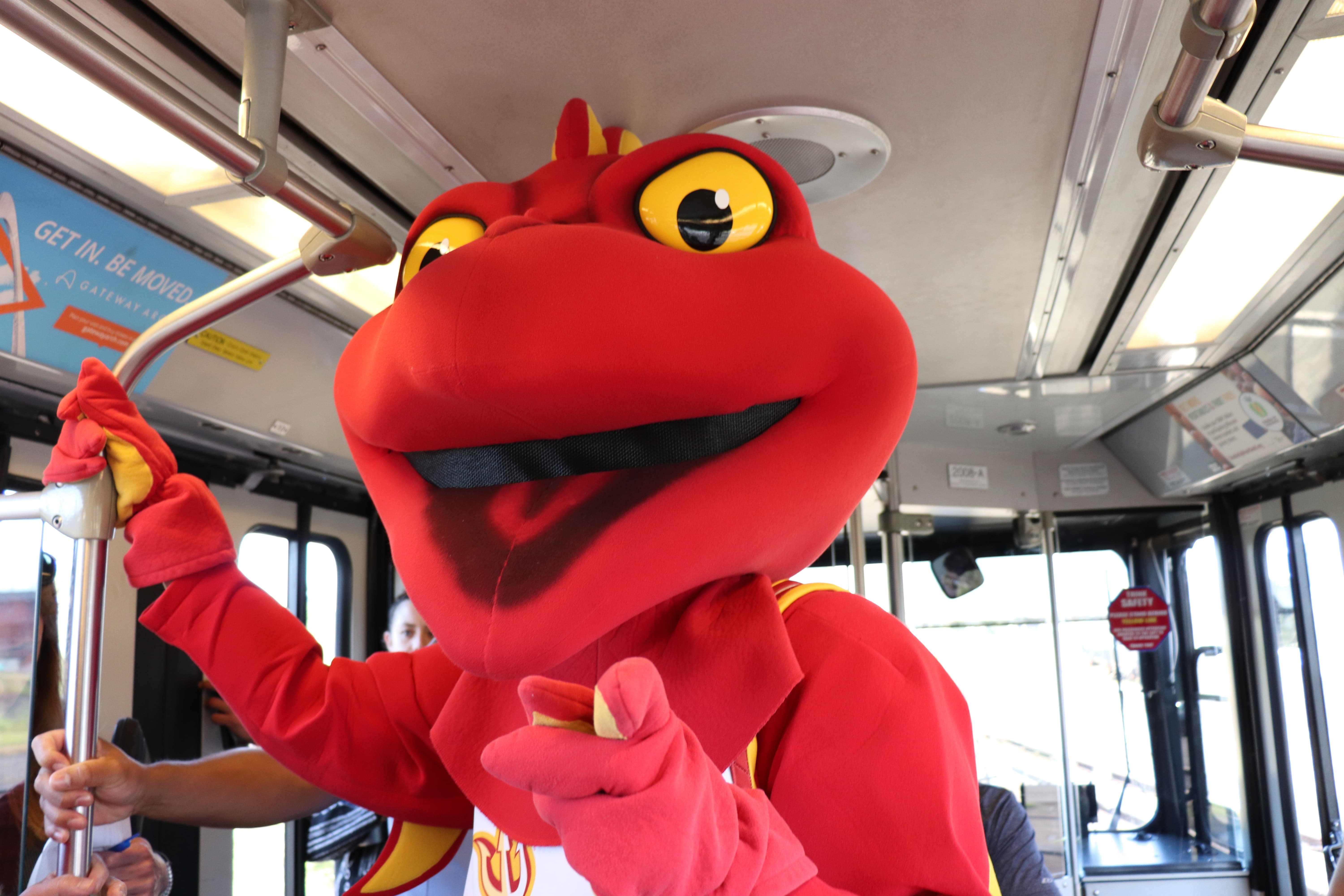 “We have a lot of collaboration among our colleges and universities and probably one of the glues that helps to foster that cooperation is the mass transit system,” said Chancellor George.

Bi-State President and CEO Taulby Roach shared how transit is proving to be particularly viable for students, as high school, college and university students alone accounted for nearly 2 million MetroLink and 1.6 million MetroBus passenger trips last school year. He also provided additional insight into Metro’s University Pass programs, through which partnering academic institutions are helping to support sustainable transit. Collectively, they provide more than 100,000 passes that offer unlimited access of the Metro Transit System for students and faculty, building those important connections to education and to the future. 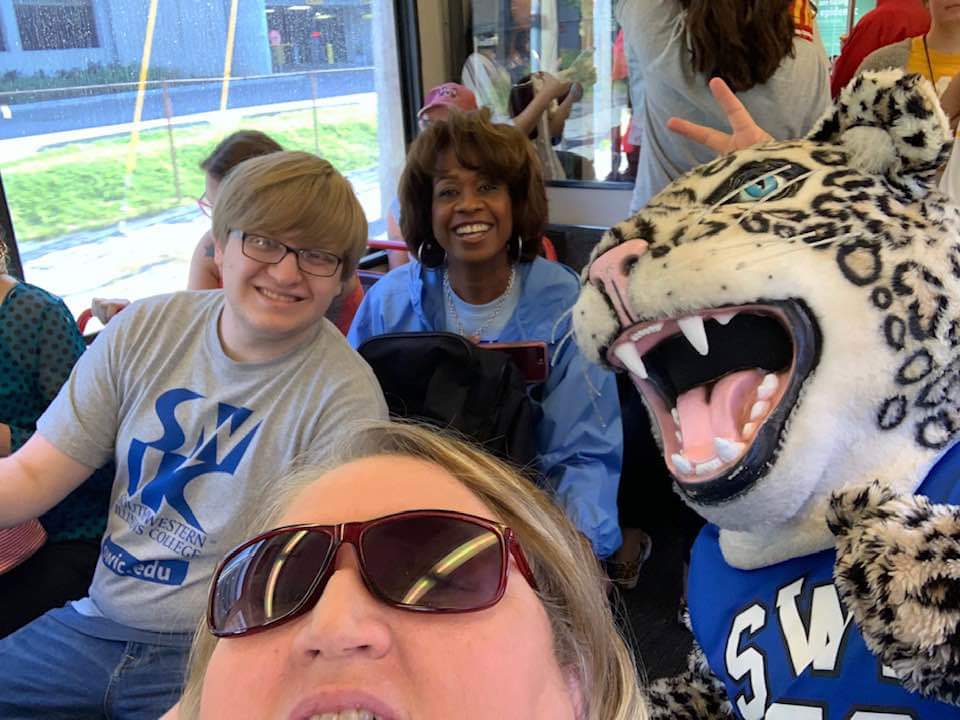 “We spend a lot of time talking about the importance of transit for economic development and for connecting people with jobs and employers. But, for about 20% of all of our riders, Metro Transit is a vital link to school and education; to creating a better future and a better life for themselves and their families,” said Roach. “To all of the students who are a part of the Metro Transit community who depend on us to get you to class and to other important as well as fun destinations around the region, we say thank you for choosing us as your mode of transportation. If you are a student and not already on board, then today’s College Transit Challenge is the perfect time for you to start taking advantage of that benefit.”

Colonel Jon M. Belmar, Chief of Police for the St. Louis County Police Department, discussed the key role a safe, integrated public transit system plays in providing access and making the region a great place for all to live, work and get an education.

“Great cities have great public transportation. We have to continue the good work we’re doing with mass transit here in this region. It makes a positive difference,” Belmar said. “I commend each of you for your commitment to use and leverage public transportation, because it matters.” 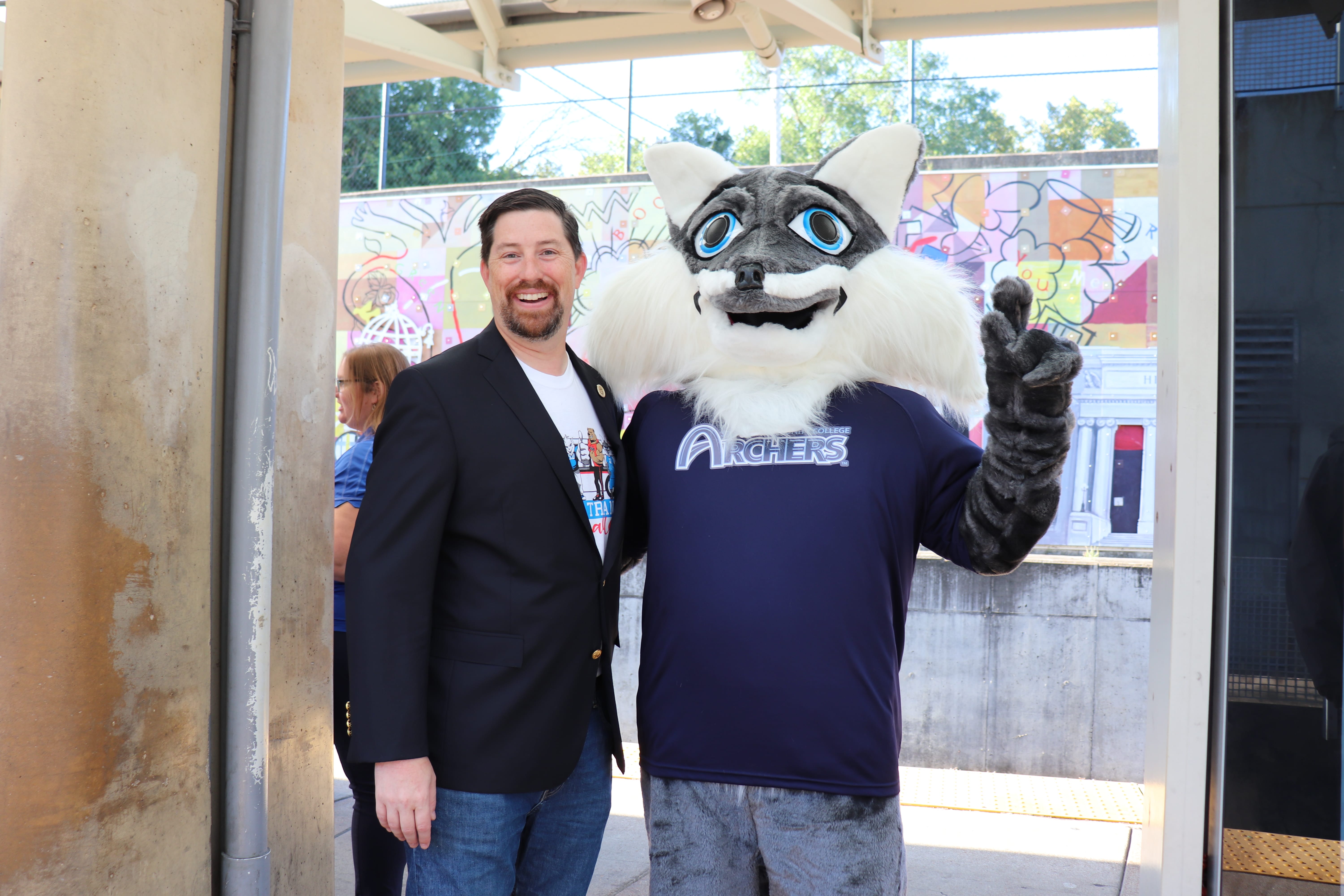 “There isn’t a more important means of transportation or means of travel than public transportation. It’s a means of connection to all the great things the region has to offer,” said Williams, who provided the students’ perspective during the kick-off event. “For me, having access to MetroLink and many buses makes all the difference. But it’s not just about getting to class each day. We are not just students; we are adulting. We have lives outside of school. We need to get to practicums, jobs, extra-curricular activities and the other places we go. So, connect, enjoy St. Louis and join me in taking the College Transit Challenge.”

Following Williams remarks, Louie the Triton, Archie the Fox (St. Louis Community College), the Billiken (SLU), Kashmir the Snow Leopard (SWIC) and Wash U’s Bear led the representatives on hand from the various schools to the MetroLink platform so they could be among the first to board the train, ‘check-in’ and officially get the challenge underway.

“Congrats to UMSL for their community-wide support of the College Transit Challenge with posts from both students and staff on all social media platforms, events on campus throughout the day to support transit usage and representation by Chancellor George, the Triton and students at the kick-off event,” said Kim Cella, executive director of CMT. “Their enthusiasm was great to see, but it wouldn’t have been a challenge without some competition, so we thank all the universities that partnered with CMT, Metro Transit and St. Clair County Transit District to highlight the benefits of the St. Louis transit system for the academic commute and to access all that our region has to offer.”

All participants of the College Transit Challenge were entered into a prize drawing for St. Louis Cardinals tickets. Plus, those who showed their Metro U-Pass to the Bureau of Transit Police and Metro Transit Public Safety Officers on the day of the event when traveling via MetroLink or MetroBus received a special prize. The 2019 prize drawing winners were Stephanie Batgirl Campbell (Facebook), Exyirus Hadley-Lockett (Instagram)  and Spooky Wilson (Twitter).